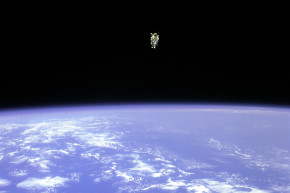 2017 Is A Key Year Of Transition For Space Exploration

A race to the moon, commercially built spacecraft, and an exoplanet hunter highlight the coming year in space

There’s going to be plenty happening down here on Earth to keep us all occupied in the coming year, but outer space also deserves attention.

2017 is something of a transition year in the story of space exploration, lacking a major milestone like New Horizons’ flyby of Pluto in 2015 or the first-ever landing on an asteroid planned in 2018. And with both NASA and private spaceflight likely to see major changes as the Trump administration’s space policy takes shape, the space stories with the most long-term impact beyond 2017 may happen down here on Earth. But those futures remain uncertain. Far clearer is that the coming year will see humanity continue to push the boundaries of space exploration, from long-overdue trips to the moon to unprecedented views of objects and worlds far beyond the eight planets of our solar system.

More than 100 launches are already scheduled for 2017, but most of these launches are for communications satellites and scientific instruments used to study Earth. Still, a number of missions will focus on the wider universe over the coming year.

Mars has garnered most of the media attention of late, but 2017 could be the year of the moon. China plans to launch the Chang’e 5 lunar exploration mission next year. It will be a sample return mission, in which the probe lands on the moon, collects about five pounds of lunar soil and rocks, and then returns to Earth — something no country has attempted since the Soviet Union in 1976. Chang’e 5 is only one part of China’s long-term plan to land on the dark side of the moon by 2018 and put taikonauts — the Chinese term for astronauts — on the moon by 2030.

The Google-sponsored nonprofit XPRIZE has also set off a race to the moon, with 15 privately funded teams vying to become the first to place a robotic lander on the moon and get it to travel at least 500 meters. The deadline for completing the task is December 2017, and teams have to secure a rocket by this New Year’s Eve or be eliminated. Only five teams have managed that so far. One joint effort by the Japanese and Indian teams’ will take off on December 28, 2017, a reminder that leaving things to the last minute is a damn near universal human impulse. The others are all likely to launch toward the end of 2017, though no other dates have been announced.

More Welcome To The Moon! Please Don’t Touch Anything

The first crewed mission for a commercially built spacecraft would have been 2017’s biggest space story, but the maiden flights for SpaceX’s Dragon 2 capsule and Boeing’s Starliner both got pushed back to 2018. Developed in partnership with NASA, Dragon 2 and Starliner would finally offer a replacement for the long-retired space shuttles, ending America’s reliance on Russia to reach the International Space Station. There are still some milestones this year, including a test flight for Dragon 2 this summer and a 30-day uncrewed test mission of Starliner launching in December. And speaking of the ISS, 2017 will also say farewell to one of the longest-serving workhorses of the Russian space fleet in February. The Soyuz-U rockets have 786 missions to their name, including the joint Apollo-Soyuz mission in 1975 — making them one of the last surviving links to that bygone era of space exploration.

At precisely 8:07 a.m. Eastern time on Friday, September 15, the Cassini probe will conclude its nearly 20-year mission by burning up in Saturn’s atmosphere. Its “Grand Finale” includes 20 circuits from Saturn’s north pole to the outer edge of its ring system, followed by 22 orbits inside the space between the planet’s rings and outer atmosphere. To ensure the probe — and any frozen microbes that might somehow have survived the long trip from Earth — can’t contaminate any of Saturn’s potentially life-bearing moons, Cassini will then crash into the planet it first reached in 2004, collecting vital data until its dramatic end.

Cassini will leave behind plenty of distant cousins — make that very, very distant — to uphold that scientific legacy. NASA’s New Horizons is halfway between Pluto and the object in the Kuiper Belt it is set to rendezvous with on January 1, 2019. According to mission leader Alan Stern, the start of 2017 will be busy for New Horizons, as it studies various other objects far beyond Neptune that would be otherwise impossible for humanity to observe. Closer to home, expect plenty more dramatic findings and striking images from the Juno mission around Jupiter, the Dawn mission around Ceres in the asteroid belt and the veritable fleet exploring Mars, including NASA’s Mars Reconnaissance Orbiter and the European Space Agency’s ExoMars in orbit and the Opportunity and Curiosity rovers on the surface.

Neither NASA nor the other agencies are launching probes to explore other planets in the solar system in 2017, but the Transiting Exoplanet Survey Satellite, or TESS, does one better. Since 2009, the Kepler space observatory has gazed at one small portion of the Milky Way to estimate the total number of earth-like planets. The results have been astounding: Our galaxy might be home to as many as 40 billion planets similar to ours. Now TESS, set to launch in December, will slowly examining the entire sky to study the planets around the 200,000 stars closest to us. Its two-year mission is to identify nearby earth-like worlds that are the best candidates for still closer follow-up studies. If we discover an exoplanet with an atmosphere sometime in the 2020s, it will likely be a world first spotted by TESS.

And that pretty much encapsulates what space exploration is likely to be all about in 2017. This likely isn’t a year of big, climactic moments, but rather of beginnings, of stories just getting started — and, in a couple cases, of old explorers saying their much-deserved final farewells.