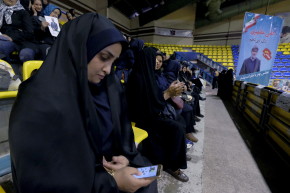 This Grocery Drives Itself To Your Door
By Ruby Nitzberg
IRAN

Iran’s Ministry of Justice is curtailing access to the wildly popular mobile game Clash of Clans, because the game is a “clear example of violence through education and the promotion of tribal war.”

According to Iranian media, a majority of members of the Committee for Determining Instances of Criminal Content recommended the game be blocked after receiving a report from psychologists that claimed the game promotes violence, tribal war, and is extremely addictive, among other issues. The game was found to be especially harmful to Iranian youth. According to human rights organization Freedom House, the Committee for Determining Instances of Criminal Content “is empowered to identify sites that carry forbidden content and report such information” to internet service providers to block.

Translation: The Deputy Attorney General: The vast majority of the members of the working group agreed to limit access to the game @ClashofClans

Technology news platform VentureBeat carried out a survey earlier this year and found that 64 percent of mobile gamers in Iran play Clash of Clans.

This is not the first popular mobile game Iran has banned. The country decided to block access to Pokémon Go in August over concerns about the game’s use of location-based technology.