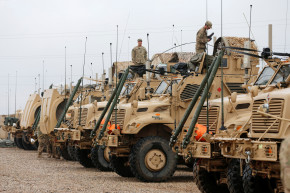 ISIS followers are hoping the proximity of American troops to the city of Mosul will lend the terror group greater opportunities to target Americans as the fight for the city stretches into its fourth month.

Reuters reported that over 5,000 U.S. troops in Iraq will be “embedding more extensively” in the fight, according to U.S. Army Colonel Brett G. Sylvia. “We are deepening our integration with them,” he said. Another U.S. commander told Reuters on Monday that Iraqi forces were set to resume their push in the eastern parts of Mosul in the coming days, after a planned “operational refit” this month. U.S. troops will be deployed inside of Mosul proper and at a greater risk, Lieutenant Colonel Stuart James said, but characterized the danger level as “moderate”.

The news buoyed supporters of the Islamic State, who posted on forums loyal to the group about the development. “Welcome to the graveyard, which was prepared for this moment,” wrote one supporter, while another declared that “Americans are fooling themselves, but they will flee faster than the others.” A pro-ISIS channel on Telegram posted on Monday that America “failed” in Mosul and decided to shell neighborhoods controlled by ISIS with artillery. “Our war with you, America, has not started yet.” The post also threatened to send U.S. troops home “slaughtered, amputated, crazy and defeated.” Another commented on the recent U.S. presidential election, saying “we are waiting for the arrival of stupid Trump to send his army to fight us in Mosul and Raqqa. We can’t wait for you, Trump. Oh America, soon we will be in Baghdad so prepare your army and weapons to defend it.”

The Iraqi army announced last week that local Iraqi forces, backed by the U.S-led international coalition, have completed the first phase of the operation, managing to retake 46 out of 56 neighborhoods from the eastern bank of the city. The western parts of the city and a total of three-quarters of Mosul are still completely under ISIS control.

A local blog from Mosul claimed ISIS has imposed the death penalty on anyone who tries to cross from the western side of the city to the eastern areas. The report was posted by Mosul Eye, a blog secretly posting about the Iraqi city since ISIS captured it in 2014, and aims to report day-to-day life under the terror group’s rule.

Crossing to liberated areas “meant death, but staying at the western bank means death too. Those who live on the western bank of Mosul are living with the prospect death in every moment,” the blog reported. There is no water, no power, no food, no fuel, and no peace. Those who stayed on the eastern bank are living under ISIS’ mortar shells and snipers.”

Vocativ couldn’t verify the identity of the person behind the Mosul Eye blog, who calls himself an “independent historian inside Mosul,” but the blogger is considered to be a reliable source by reporters and analysts in the region.

The operation to take back Mosul launched in mid-October and is led by Iraqi forces, Kurdish Peshmerga and Iranian-backed Shiite forces on the ground, alongside U.S and other foreign air support. More than 100,000 militants are reportedly taking part in the operation, the largest offensive in Iraq since the U.S. invasion of 2003.