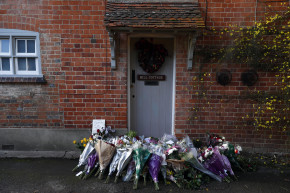 The world mourns a pop superstar through his music

Floral tributes are seen outside the house of singer George Michael, where he died on Christmas Day, in Goring, southern England — REUTERS
By Jacob Steinblatt
Dec 26, 2016 at 10:00 AM ET

Iconic pop superstar George Michael passed away on Christmas day at the age of 53, and fans around the world are memorializing him through some of his most beloved songs.

Vocativ analyzed over a million tweets about George Michael since Sunday night, shortly after his death in England was announced, in order to see which of his hit songs were the most discussed as fans mourned the chart-topping artist. Last Christmas, Careless Whisper, and Faith were the three most popular on Twitter, with Freedom and Praying for Time rounding out the top five.

Vocativ referenced George Michael’s 20 biggest Billboard Hot 100 hits, based on the songs’ performance on the Billboard Hot 100, in addition to Last Christmas, which didn’t perform as well but is a fan favorite, especially at this time of year.

Along with his hit singles, George Michael was an inspiration to many in the LGBT community. He disclosed that he was gay in 1998 and championed LGBT causes, including charities for those suffering the effects of HIV/AIDS.

R.I.P. George Michael. You inspired many and your music will live on in the hearts of the community. You will be sorely missed x pic.twitter.com/tjXqkArahj

Today we mourn the tragic loss of George Michael, who did so much in the fight against HIV and for LGBT rights. He will be much missed.