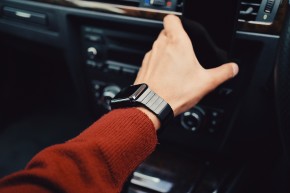 Our Phones And Smart Watches Could Measure How Drunk We Are

In most cases, it’s a friend or eagle-eyed bartender that steers you away from trying to drink and drive after a long night at the club. But if research performed by a small group of Israeli scientists continues to pay off, it might instead be your smartphone someday.

Earlier in December, a trio of researchers from the Ben-Gurion University of the Negev made available their results from a nifty (though not formally peer-reviewed) study of theirs, one that showed how existing mobile and smart devices could be retrofitted into a sort of virtual breathalyzer.

They asked 30 volunteers, mostly young men and women, to take part in a series of tests just before they headed into one of three bars in the area. First, the volunteers were outfitted with several Android-centric wearables — a pair of smart watches for both hands, the Google Glass for their head, and a Samsung smartphone to be put in their pockets if possible — that recorded their exact movements as they walked in a straight line for about sixteen seconds. When the volunteers inevitably left the bar to go home, they once again donned the devices and performed the same test, along with the same sort of breathalyzer test performed by police.

By measuring how their movements had changed between the two time periods, the team was able to accurately predict if a volunteer was drunk with around 95 percent accuracy (about a third were, according to the country’s standard for intoxication — having a Blood Alcohol Concentration, or BAC, of 0.05). When they dug further, they found that only two combined measurements, from the phone and watch, were needed to provide a still-impressive accuracy of 93 percent.

According to an interview Ben Nassi, the paper’s lead author and a graduate student at the university, gave the Christian Science Monitor, the software they used to create their virtual breathalyzer should be easy to fully translate over into an app, since it simply relies on the built-in motion sensors found in most smart devices. Adjusting it for different countries’ threshold of intoxication would also be a snap. In the case of the U.S., which boasts a higher legal BAC of just under 0.08, it’d likely be even easier for their technology to detect drunkenness.

More How Smartphone Makers Could Save Lives On Thanksgiving Weekend

Of course, these results are preliminary, with a small group of subjects. And there could be certainly legal and privacy concerns if the data collected from an app was somehow lifted or otherwise abused by others. In other words, this kind of app might keep you from making a poor decision (especially if, say, it was connected to a smart car that kept you from driving it when under the influence), but it could also be used by a boss to know what you’re doing on the weekend or maybe by police as evidence.

For the time being, Nassi and his team hope that they or others can continue to develop their software, either by incorporating it into the devices of the future, like smart rings and clothing, or by creating an even more accurate model that’s personalized to each user.