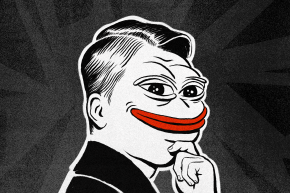 The latest tantrum by the “alt-right’s” neo-Nazi Internet trolls is playing out in a small town in Montana, where a leading voice in the movement now claims he will hold an armed march through the town to intimidate its “Jew racketeers.”

The situation in Whitefish, Montana has garnered national headlines over the last few weeks. The mother of Richard Spencer, the de facto leader of the “alt-right,” owns a property in town, but community members have been pressuring her to sell because of her son’s newfound fame as the leader of a prominent white supremacist movement. Now, trolls from the “alt-right” are going after the community, led by Andrew Anglin, the publisher of the Daily Stormer blog — the self-declared “number one alt-right” website in the world — who spearheaded and helped organize the harassment of the people he believes are threatening Spencer’s mother. Up until now, the intimidation tactics have lived largely in cyber-space, but on Thursday, Anglin called for the next phase of “Operation Whitefish,” and extended his call to “take action.”

“For the next phase of our plan…we are planning an armed protest in Whitefish,” Anglin wrote in a blog post published Thursday. “Montana has extremely liberal open carry laws, so my lawyer is telling me we can easily march through the center of the town carrying high-powered rifles.

“I myself am planning on being there to lead the protest,” he continued.

Anglin, a proud, Hitler-saluting Nazi, lives in Ohio and rarely appears in public. He claims to have already organized “about 200 people to participate in the march, which will be against Jews, Jewish businesses and everyone who supports either. We will be busing in skinheads from the Bay Area.”

Anglin has tried — and failed — to organize off-line events like the one he plans in Whitefish on multiple occasions. They tend to never pan out — and this one likely won’t either.

“Anglin has so far largely been unsuccessful in mobilizing real world activity, as opposed to things like online harassment, so we take claims like this with a grain of salt,” said Mark Pitcavage, a senior research fellow at the Anti-Defamation League’s Center on Extremism, which tracks extremist groups like the “alt-right” and hate-mongers like Anglin. He added, however, that Anglin is “going great guns on this one, so he might actually try something.”

Reached for comment, Anglin told Vocativ, “I have never planned any marches before. The ADL/SPLC are a bunch of lying Jews.”

The march, so says Anglin, is planned for mid-January.

The dustup in Whitefish came on the heels of a highly publicized “alt-right” conference in Washington DC, where Spencer — who until recently has steered clear of openly acknowledging the neo-Nazi element of the “alt-right” movement — gave an impassioned speech about the future of the movement that concluded with several of those in attendance giving Nazi salutes as Spencer raised his glass in a similar manner on stage after ending his address by yelling, “hail Trump, hail our people, hail victory!”

The speech — more specifically, the Nazi salutes — made national headlines. As Spencer’s profile grew, so did criticism of his movement. And people in Whitefish, where his parents live and he spends time, took notice. Earlier this month, a realtor in the town with ties the activist group Love Lives Here began pressuring Spencer’s mother to sell her building due to the bad publicity her son’s ties to the town had created.

In a letter published by Medium, Sherry Spencer outlined the “terrible threats” made by the realtor and others. “[O]ur building and the retail tenants have been targeted by some in the Flathead community because of Richard and the National Policy Institute,” she wrote in the letter. (Flathead is the county where Whitefish is located.) She notes that she has received death threats, writing of her and her tenants: “We, too, are victims, having no role in any of the events that have unfolded recently.”

In response, Anglin directed his “troll army” to “take action” against the realtor, the activist group, businesses in the town, and others, primarily Jews, who he felt targeted Sherry Spencer. He even sicced the trolls on the realtors young son, calling him a “scamming spammer rat.”

Spencer did not respond when asked if he condones the tactics taken by Anglin.