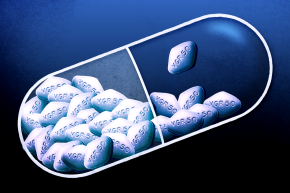 This Christmas, Stay Away From Tainted Sex Supplements, Says FDA
By Ed Cara

This Christmas, Stay Away From Tainted Sex Supplements, Says FDA

In the likely case you’re still scrambling for a last-minute stocking stuffer, the Food and Drug Administration has a timely recommendation for you — best to stay away from the sex rhino pills this holiday season.

On Thursday, the agency released a flurry of public notifications, 14 in total, warning of various tainted sex enhancement supplements available over-the-counter. The list of pills, which includes winners like Duramaxxx, Bl4ck 4k, and several Rhino brands, wasn’t singled out for having been contaminated with toxic ingredients like arsenic or lead, though. In every case, the agency found, it was because they were laced with something FDA-approved that actually works: Sildenafil, the active ingredient found in the prescription-only drug Viagra. Then again, considering one brand was literally called African Viagra, we shouldn’t really be that surprised.

According to a FDA spokesperson, the tainted supplements, shipped into the country from internationally, were detected during a routine inspection by their Office of Regulatory Affairs.

Funny as it might seem to see these supplements busted for being, you know, real drugs, there’s a danger to be aware of here. The hidden interactions that sildenafil can have with other drugs, particularly with blood pressure medication that contains nitroglycerin or other nitrates, can be unpredictable and possibly even deadly under particular circumstances, especially since doses of an ingredient often vary wildly from one bottle or even one pill to the next.

And people have died or gone into coma after taking Viagra-laced supplements or counterfeit versions of the little blue pill. Perhaps most famously, former NBA player Lamar Odom lapsed into a coma in October 2015 after having taken a so-called herbal Viagra brand (which the FDA had issued a similar warning about in 2013) along with a bevy of other drugs. Though he ultimately survived the ordeal, he suffered multiple strokes and kidney failure that left him on life support.

More recently, a July 2016 report by the watchdog nonprofit Consumer Reports found that 15 supplement ingredients found in your typical GNC or Costco aisle could pose a public health risk, including some found in sex supplements. Take the herbal ingredient yohimbe, for instance, which can cause seizures, liver and kidney damage, and death in high enough doses.

Unfortunately, the FDA, thanks in large part to the 1994 Dietary Supplement Health and Education Act, has little regulatory power over supplements, tainted or otherwise. And what’s worse is that no one, including the FDA, is really sure how big the problem of tainted, mislabeled or dangerous supplements is. The agency inspects only a sliver of shipped pills, and by all indications, there’s only so much they can catch. And while the problem of counterfeit Viagra or other drugs is larger in less-developed areas of the world, there does seem to be an uptick in the United States as well. Aside from the 14 new notifications, the FDA has posted an additional 33 warnings about tainted sexual enhancement products in 2016 alone.

The cherry on top is the fact that virtually no over-promising supplements, whether for boosting your bedroom prowess or losing weight, are good at their jobs, at least if they aren’t laced with the real deal.

All in all, it’s worth reminding everyone of a familiar but relevant cliché: If it sounds too to be good, it definitely is.