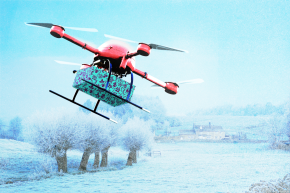 Drones That Could Deliver Your Holiday Gifts Are Taking Off

More and more competitors are entering the drone delivery race

If you’re anxiously waiting for your last-minute holiday gifts to arrive at your door, you’ll be happy to know that a time when drones could fly them straight to you isn’t too far off. After years of hype, a number of real drone delivery services have recently or will soon begin testing.

Earlier this month, Amazon made its first commercial drone delivery on Wednesday in Cambridgeshire, England, using “Prime Air,” a pilot program that uses unmanned drones to ship customers packages in 30 minutes or less. According to the New York Times, the delivery of an Amazon Fire streaming device and popcorn took 13 minutes, having been deployed from an Amazon warehouse about 2 miles away. Further testing will follow, and Amazon Prime Air will be delivering more packages up to five pounds on journeys that take 30 minutes or less in the near future. Earlier this week, the company received a patent for technology that aims to keep Prime Air from being hacked off its course.

Though Amazon is based out of Seattle, the company chose to begin this project in England given that American aviation rules released earlier this summer are pretty strict, serving as the biggest obstacle in making seeing delivery drones “as normal as seeing mail trucks on the road,” as Amazon puts it. But drone laws in Europe are far more lax. So much so that at least one government entity governments is beginning to implement this type of these programs itself.

Along a roughly nine-mile route in the south of France, autonomous drones will soon be delivering small packages for the French postal service, Le Groupe La Poste, on a regular basis. (So long as they travel no faster than 19 miles per hour, carrying packages that weight 2 pounds or less.)

Still, commercial drone programs are gaining traction in the U.S., where experts predict federal regulators will soon become more accepting. Convenience store chain 7-Eleven recently told Recode that it has delivered shipments to 77 customers in Nevada since it became the first FAA-approved autonomous drone delivery program back in July. And while 7-Eleven probably isn’t the first place one would think to get their loved ones gifts, it’s certainly a start. Plus, Google owner Alphabet’s Project Wing has been testing its drones for delivery since the summer with the support of the National Science Foundation in hopes of commercial availability for 2017, and Wal-Mart has had plans for delivery drones in the works since last year.