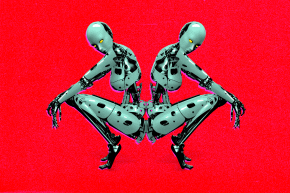 Who Wants To Buy A Sex Robot?
By Allee Manning

Who Wants To Buy A Sex Robot?

Turns out, it's not necessarily who you'd expect

Despite the fact that fully humanoid sex robots do not yet exist, chances are you already have a preconceived notion of who would be interested in boning one: sad, lonely men who can’t “get” a real woman. Empirically speaking, however, that stereotype is unfounded.

Turns out that men who are satisfied in their sex lives (including those in romantic relationships) are just as interested in theoretically purchasing one within the next five years as their single, admittedly-lonely peers, according to paper from researchers at the University of Duisburg-Essen in Germany presented at the Second International Congress of Love and Sex with Robots earlier this week.

Overall, 40 percent of the 263 heterosexual men surveyed said they’d consider buying one of these products, which researchers specifically described as being hyper-realistic android robots with the ability to move on their own. (And yes, by “move,” they mean move in ways suited for getting their user off, insinuating that artificial intelligence would be built into their programming.)

“I was very surprised,” researcher Jessica Szczuka told Vocativ, citing the media stereotypes that surround those interested in sex dolls and sex robots. “This is not something that just appeals to a fringe group of people.”

One limitation of the study was that cost was not included within survey-takers evaluations of whether or not they would want a sex robot of their own. It’s also worth noting that participants were recruited with posts on social media and in newspapers stating that the study would evaluate robots and the sexual aspects of human-robot-interaction, probably attracting men who were already somewhat open-minded about sex robots. Still, it is the first-of-its kind in showing who might be interested in a sex robot to begin with.

Rather than relationship status or sexual satisfaction, the most relevant indicator of whether or not a man would be interested in potentially owning a sex robot is whether or not they already tend to anthropomorphize inanimate objects. This refers to the tendency to ascribe human characteristics to non-humans objects — for example, survey responses might include: “Part of the reason why I picked a new car/electrical item was because when I first saw it I felt it had a friendly personality.”

Szczuka notes that while there is a wealth of research being done into the philosophical and ethical aspects of sex and robotics, empirical research into interest and attitudes is still largely lacking (in large part because these products are not yet available). One of these areas where she believes research is needed is whether one’s interest in or enjoyment of a sex robot would be hindered by the uncanny valley — the sense of revulsion people feel when faced with a robot is that is close to resembling a human, but not quite right. While her research suggests human likeness would increase the intention to purchase a sex robot, the level of acceptable resemblance is still pretty much unknown.

“The sexual context can be very unique,” she said, noting how emotions can override our logical perceptions when we’re in the heat of the moment, so to speak. “It could be possible that this model of the uncanny valley doesn’t work for this kind of interaction. [It might be] that you see and feel what you want to see and feel in that moment.”

The study also notes that “it could be imaginable that clients who pay a lot for sex robots are aware of the fact that robots are non-human, which could prevent their evaluations from falling into the uncanny valley.”

This could mean that robots don’t need to be as realistic as those on “Westworld” to be deemed suitable for boinking, and that the progress of companies like sex doll giant Abyss Creations might herald marketable sex robots sooner than we think — which is already pretty soon.

David Levy, a pioneer in research on the topic of love and sex with robots, famously predicted that robots could be “perceived as being similar to biological creatures” by 2050, and other researchers predict it could be as early as 2025 that robotic sex partners are commonplace.