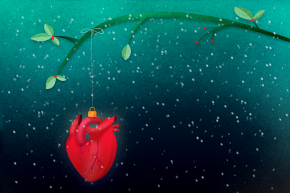 Why Do Heart-Related Deaths Spike Over The Holidays?
By Allee Manning

Why Do Heart-Related Deaths Spike Over The Holidays?

It’s with a heavy heart that we say this, but ’tis the season for cardiac deaths. But contrary to what scientists previously thought, this might not have anything to do with cold temperatures of winter.

A new study published in the Journal of the American Heart Association analyzed data from over 197,109 cardiac deaths over the course of 25 years and found that heart-related deaths occurring outside hospitals increase by over 4 percent between December 25 and January 7. Additionally, over the holidays, the average age of cardiac deaths drops by just under a year, from 77.1 years to 76.2 years.

The data comes from New Zealand, where Christmas occurs during the country’s summer solstice and the weather is temperate. This is a major difference from past studies on this topic (termed the “Christmas holiday effect” by mortality researchers) that were conducted in the U.S., where seasonally high natural death rates have been linked to cold weather and the flu. The fact that cardiac deaths spiked in New Zealand — despite the mild weather and overall seasonally low death rates — suggests that there are other, non-weather related causes for the rise in deadly heart attacks.

Instead, the researchers speculate that a variety of other holiday-specific causes could be to blame. These would include changes in diet and alcohol consumption, emotional stress, and the high prevalence of travel people embark on during this time.

“People frequently holidaying away from their main medical facilities…could contribute to delays in both seeking treatment, due to a lack of familiarity with nearby medical facilities, and due to geographic isolation from appropriate medical care in emergency situations,” one researcher suggested in a press release.

Which, we think, makes for a pretty decent excuse to stay home rather than going to see your in-laws this year.