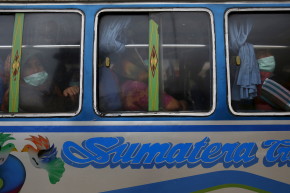 Om Telolet Om: The Story Of A Bizarre Indonesian Meme
By Ethan Harfenist

This Grocery Drives Itself To Your Door
By Ruby Nitzberg
Indonesia

Om Telolet Om: The Story Of A Bizarre Indonesian Meme

A bizarre Indonesian meme is taking over the internet. It started as a local joke about a month ago has suddenly seeped into the social media accounts of DJs, celebrities, and the president-elect of the United States.

The meme in question is “Om Telolet Om,” an Indonesian phrase that refers to the sound some city buses in the archipelago make. On Tuesday, the tacky and arpeggiated sound popped up on the accounts of some famous DJs, without any apparent context.

As the meme gained traction outside of Indonesia thanks to confused dance music stars and their hundreds of thousands of followers, it very soon afterward spread outside of the dance music world and onto the social media accounts of certain celebrities. President-elect Donald Trump’s Instagram account is being overrun with users typing the phrase in the comments of his photos. And as Billboard pointed out, the accounts of Kim Kardashian, LeBron James, and Dwayne “The Rock” Johnson have also been covered with posts of “Om Telolet Om.”

So, how did this all happen? “Back in November, the Indonesian Facebook sphere buzzed with videos of children and youngsters standing on the streets of Ngabul, Jepara, Central Java, shouting ‘om telolet om!’ at passing inter-province buses.

“The phrase om telolet om literally means ‘Sir, honk your horn, sir,’ and when bus drivers honk to produce the telolet sound the children cheer in glee,” local Indonesian newspaper the Jakarta Post writes. “The video was first uploaded by a Facebook user on Nov. 26 and has since garnered over 1 million views and 44,409 shares on Facebook.” Further, the Post says that “telolet hunters,” citizens out seeking the noise, have caused traffic jams in the area.

Indonesian artist Angger Dimas also helped shed a little more light on the phenomenon. Speaking to Billboard, Dimas said, “‘Om Telolet Om’ is just a common saying that I’ve heard many times when I had road trip with my family. Buses use that arpeggiated horn set to keep other drivers alert because number of accidents are really high due to traffic, until now.”

Now, this once-local in-joke has taken on a life of its own outside of Indonesia thanks to the awesome power of social media and has become an international onomatopoeia. It is also already to be making its way into electronic music, with the sound being incorporated into remixes.

Haha as you guys requested, here it is!! #OMTELOLETOM https://t.co/oUjVRLtC2s

The internet is beautiful, isn’t it?