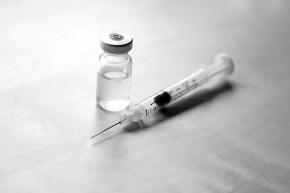 The World’s Largest Trial Of Preventative HIV Shot Is Underway

Volunteers will receive an experimental drug that offers promise and convenience

The near-future of HIV/AIDS prevention may involve a needle jab every couple months — so long as things go according to plan in the next five years.

On Tuesday, the National Institutes of Health (NIH), along with partner pharma company ViiV Healthcare, announced the start of a clinical trial that will test whether the anti-HIV drug cabotegravir can protect people from contracting the virus when given as a bimonthly injection. Some 4,500 men who sleep with men and transgender women who have sex with men are expected to be part of the trial, which will take place at more than 40 testing sites spanning the globe. Volunteers will randomly receive either a shot of cabotegravir along with a daily placebo pill or the preexisting preventive HIV pill Truvada with a placebo injection.

A similar trial of women will get its go-ahead sometime next year.

“We urgently need more HIV prevention tools that fit easily into people’s lives,” said Dr. Anthony S. Fauci, director of the NIH’s National Institute of Allergy and Infectious Diseases (NIAID), in a statement. “Although daily oral Truvada clearly works for HIV prevention, taking a daily pill while feeling healthy can be difficult for some people. If proven effective, injectable cabotegravir has the potential to become an acceptable, discreet and convenient alternative for HIV prevention.”

The lengthy trial will take about 4.5 years to complete, with different phases along the way. For the first six weeks, volunteers will only take two pills a day, either cabotegravir or Truvada, and a placebo. Then they’ll start getting injections every four weeks for the next two months, then every eight weeks for about 3.5 years. During this phase, the cabotegravir group will also take a daily placebo pill, while the control group will get daily Truvada and a placebo shot. After all that, both groups will exclusively take Truvada for another 48 weeks. Patients will also receive counseling to help them stick to the treatment regimen, along with free condoms and HIV prevention counseling, and any person who ends up contracting the disease will be taken out of the study and referred to the right local doctors for standard treatment. Since Truvada (actually a combination of two anti-HIV drugs) is already incredibly effective at preventing infection when taken properly, the real test cabotegravir has to pass is simply matching that success.

The UK-based ViiV, formed in 2009 as a collaboration between pharmaceutical giants Pfizer and GlaxoSmithKline, is exclusively a developer of HIV drugs, with 12 currently on the market. And their experimental cabotegravir, both in pill and injectable form, has already shown some promise for its ability to block an HIV enzyme called integrase needed for the virus to replicate.

Currently, Truvada is the only widely approved drug for what’s formally called pre-exposure prophylaxis (PrEP), having gotten FDA approval in 2012. But while the drug isn’t inherently foolproof — at least two people have gotten HIV while taking it, likely because they contracted a rare resistant strain — one of the largest hurdles PrEP has faced is people simply not feeling capable of taking it every day (its huge out-of-pocket price of $13,000 a year being another). An injectable version may not solve the price problem, but it could entice more people to take PrEP.

For those set on an even longer-term solution, they might want to pin their hope on another NIH-funded study announced last November. The trial will test out a beefed-up experimental vaccine treatment that had shown some modest success — protecting one-third of users — in an earlier 2009 trial. It’ll take place in southern Africa, an area hit especially hard by the virus, and involve over 5,000 men and women.

The original article incorrectly described the experimental design of the clinical trial and has been corrected. We regret the error.