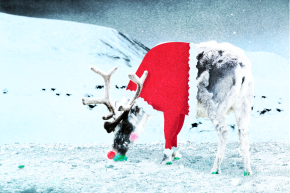 How Reindeer Are Slowing Global Warming (Not By Flying Us Our Presents, Sadly)
By Alasdair Wilkins

How Reindeer Are Slowing Global Warming (Not By Flying Us Our Presents, Sadly)

Their grazing allows the Arctic to absorb less heat

Reindeer have attained their greatest fame thanks to Clement Moore and “Twas the Night Before Christmas,” which first gave the world the notion of eight flying reindeer pulling Santa Claus’ sleigh. Real reindeer don’t have anything as impressive as that on their resumes, but give them time: New research suggests their love of eating shrubs could help cool off the rapidly warming Arctic tundra.

High northern latitudes have already experienced some of the most dramatic effects of climate change, as permafrost melts and once desolate regions turn green. And while that sounds like one of the relatively benign aspects of global warming, those changes threaten the fragile existing environment. Worse, the increased shrub cover allows more of the sun’s heat to be absorbed at the surface, exacerbating warming more quickly. These aren’t small differences: Shrubs absorb about 80 to 90 percent of the incoming heat, whereas the white snow reflects most heat.

While it’s asking a lot for environments to cope with these rapid, human-driven changes, sometimes the natural world does us a solid. In this case, the grazing patterns of reindeer in the Scandinavian Arctic reveal that they can increase reflectivity enough to offset the shrubbery’s warming effect, according to researchers at Umeå University in Sweden. They found the difference between light and heavy grazing could have a big effect on the regional energy balance, roughly equivalent to the effect of doubling atmospheric carbon over a given patch of land.

That sounds dramatic, but the effects of heavy grazing also complex and not completely straightforward.

For instance, though the surface of heavily grazed land absorbed less heat, the soil beneath the surface was hotter in heavily grazed land than it was in its lightly grazed counterparts. These hot soil temperatures could help microbes break down the soil and release carbon. “Although grazing might be beneficial in terms of decreasing the net radiation, it might not be in term of releasing carbon into the atmosphere,” they write.

Even so, the researchers are optimistic about the potential of reindeer — not to mention other herbivores — to reshape the land in ways that can potentially slow warming. Reindeer, they said, could end up being an important regional factor shaping the climate — though most parts of the Arctic don’t have as many reindeer as the part in their study.

Reindeer could be doing their part to help offset climate change, even if it’s only a little bit. It obviously can’t solve everything, but they’re giving us a present Santa would be proud of.