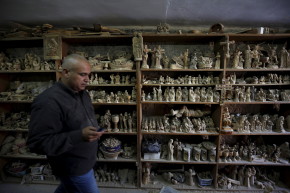 The traditional olive wood carvers of Bethlehem are suffering, not because of political turmoil, but under a flood of 'Made in China' imitations

A Palestinian sculptor walks past figures of the Holy Family carved from olive wood in a workshop, ahead of Christmas in the West Bank city of Bethlehem December 21, 2015. REUTERS/Mohamad Torokman - RTX1ZNAC — REUTERS
By Shira Rubin
Dec 26, 2016 at 11:04 AM ET

After years of violent unrest, the Christmas season is looking cheery in Bethlehem again. The Christmas tree went up, the Santa suits were laundered, and the hotels are fully booked. The market in Manger Square is open for business to meet the hordes of international tourists who have descended upon the ancient city.

But local artisans say that this year’s enormous economic opportunity is being offset not by turmoil, but by knockoffs — cheap Chinese fakes are undercutting the prices of the traditional olive wood pieces produced in the region for centuries.

“Us, the olive wood carvers, are often uneducated people who learn the trade from our fathers and our grandfathers. So the flood of olive wood carvings with the ‘Made in China’ tag on the back is especially destructive for us,” said Issa Musleh, a Christian resident of Beit Jalah, near Bethlehem, who carves olive wood in a workshop owned by his family for multiple generations. “I’m a simple man, I started working at the age of 11, but we’re dealing with too much competition these days.”

Bethlehem bases its economic survival on the crowds of religious pilgrims and tourists that flock to this West Bank city around Christmas and the winter holidays. In fact, the sector now accounts for more than forty percent of the city’s economy, according to the municipality.

But tourism, along with the rest of the economy, has long languished, in part because of Israeli restrictions which require tourists to pass a towering, often traffic-clogged checkpoint along Israel’s separation barrier in order to reach the town.

In a Christmas message issued Friday, Palestinian President Mahmoud Abbas called upon tourists and pilgrims to visit Bethlehem, “the birthplace of Jesus [and] and an integral part of the occupied territory that has not been spared the brutality exercised by decades of humiliation, colonization and apartheid.”

Did you know that there are 18 illegal Israeli settlements built on #Bethlehem' land? #Christmas #Palestine https://t.co/TZ7csYJf9w pic.twitter.com/rtQqtRNTEO

Shopkeepers hope that the 60,000 Christians expected to visit the Holy Land this holiday season will bolster Bethlehem’s economy, which has proven fragile and highly dependent on the security situation.

During Christmas 2015, the “knife intifada,” in which a wave of Palesitnian stabbings brought upon clashes and crackdowns in the Palestinian Territories, kept most tourists away. Instead of Christmas parades and festival, the most popular images coming out of Bethlehem were of protesters donning Santa costumes while confronting Israeli soldiers.

The atmosphere this year is still somewhat tense. Palestinian Santas again rioted against Israeli soldiers, and security was tight following attacks on Christian targets in neighboring Egypt and across the region by Islamic extremists. But Palestinians were also optimistic after the passing of a UN Security Council resolution on Friday calling for an end to illegal Israeli settlements.

“All people over the world are looking at Bethlehem so we hope more and more tourists will come during the year and that next year we will celebrate Christmas without occupation,” Palestinian tourism minister Rula Maaya told the AP.

As millions globally begin celebrations for Christmas Jesus' birthplace, Bethlehem is illegally occupied.
We live in a crazy world pic.twitter.com/PPdWZ5JP9x

But while Bethlehem is welcoming 40,000 more visitors than last year, business is being threatened by in a different way: an influx of Chinese-made imitation products, said Suzan Sahori, executive director of the Bethlehem Fair Trade Artisans nonprofit organization.

She said that Chinese manufacturers in recent years have been approaching her at international exhibitions, asking if they can take pictures of hand-made wooden pieces —including such signature Palestinian products as olive wood rosaries or checkered kuffiyeh cotton scarves — informing her that they were going to make it cheaper.

“We always use the slogan: We are in Palestine, not in China, we don’t want those cheap goods,” she said, adding that the steep competition makes it daunting for artisans to learn how to fairly price their work. She further blames the Palestinian Authority’s greed for import tax revenues for allowing Chinese products to enter the local market.

“The Chinese imitations are invading the whole world, but in Palestine, they are cutting off one of the only lifelines that we have,” said Sahori.