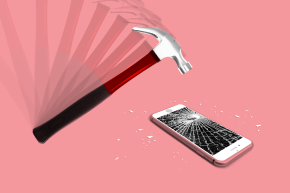 Would you throw your phone into the toilet or “accidentally” leave it behind in an Uber just so you can get a new one? A new study says there’s a possibility you’ve already done it.

A group of researchers published a study in the Journal of Marketing Research that explores the idea of consumers finding ways to lose or damage their phone in order to go buy the new updated model, regardless of how well their current one works.

“We label this phenomenon the ‘upgrade effect’ and suggest that such careless tendencies are intended to promote the acquisition of upgrade products by helping consumer justify the new purchase,” the researchers state in their paper.

Silvia Bellezza, assistant professor of marketing at Columbia Business School, told Vocativ the interest for the study came after she and her team started seeing TV ads featuring similar “upgrade effect” behavior, which meant that marketers might be aware of people’s tendencies.

One commercial in particular was Virgin Mobile’s “Happy Accidents,” which features people dipping their phone in water, dropping it from the balcony or sticking it in the microwave just because they heard there’s a better phone deal waiting for them at the store.

“You’ll read the (research) paper and notice, ‘Oh, I’ve definitely done this,’ but you weren’t aware that you were doing it,” Bellezza said.

Belleza, along with colleagues Joshua M. Ackerman and Francesca Gino, said they used the IMEI Detective database — a digital lost and found — to monitor how many people stopped looking for their iPhone 5 once the 5SE was released. The researchers found that iPhone 5 owners spent less time looking for their phones or simply did not report them missing.

The IMEI is a 115-digit number that is assigned to every mobile phone in existence. The database allows consumers to input their number and trace their phones when they lose them.

Once the researchers had the data set — which examined about 3,000 lost Apple iPhones — they tried replicating it in the lab, but had difficulties convincing people to consciously destroy their items. Belleza said that, instead, they had about 100 participants play Jenga with $1 mugs on top of the towers. Half of the participants were presented with three other, much fancier mugs, and the other half only had the original mug.

The objective of the experiment was to play the game as long as possible without dropping the mug. Belleza said that, in the end, those with the alternative mugs would try less and would much rather break the simple mug so they can replace it with a $10 one.

The experiment led them to conclude that people will often subconsciously behave in careless ways with their phones because they have a desire to justify their purchasing decisions. Otherwise, we’d feel guilty for spending money on an item we don’t really need. Yet, if the product was accidentally “lost,” then it’s a perfect excuse and we don’t seem wasteful.

The “upgrade effect” is not exclusive to phones and other electronic devices. The team of researchers found the same theory also applied to products such as laundry detergent, shampoo, toothpaste and perfume. Consumer will use exaggerated amounts so they can finish it and buy the new formula.

Companies like Apple and Samsung are in a way to blame for this behavior since they release new phones every year. In Apple’s case, they release new models at least twice a year. Stores like H&M have also caught on to this phenomenon, but help consumers feel less guilty about purchasing new clothes since they offer shoppers a discount when they donate their old clothes.

The “upgrade effect” mentality can lead to a lot of consumer waste, but Belleza said that the best way to deal with these desires is by recycling or donating these products.

“I think it’s better for someone to give their old phone to their little cousin instead of just sabotaging it,” Bellezza said.

Or, maybe, we could just try to fight our peak consumerism desires to have the latest product, regardless of need. But that might be asking a lot.