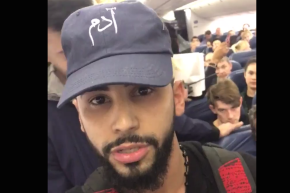 YouTube Star Says He Was Booted From Flight For Speaking Arabic

An American YouTube star’s claim that he was kicked off a Delta flight for speaking Arabic on Wednesday went viral, triggering outrage and calls to boycott the airline but also raising questions as to whether the incident was a planned publicity stunt.

Adam Saleh, whose video pranks and hoaxes have earned him millions of followers online, recorded and published a clip that shows him and a friend being escorted off the aircraft, which was traveling from London to New York. During the incident, the 23-year-old says that passengers “felt uncomfortable” and called flight attendants after they heard him speaking Arabic while on the phone with his mother. In less than four hours, the video had generated more than 215,000 retweets on Twitter. A version published on Saleh’s Facebook account had been viewed by more than 6 million people, shared 197,000 times, and generated over 28,000 comments.

We got kicked out of a @Delta airplane because I spoke Arabic to my mom on the phone and with my friend slim... WTFFFFFFFF please spread pic.twitter.com/P5dQCE0qos

“I can not believe my eyes. I can not believe it,” says Saleh in the video, which pans to show a passengers and flight attendants caught up in the commotion. “I spoke a word — a different language — and you feel uncomfortable?”

The YouTube personality, who has more than 2.2 million subscribers on one of his channel, added: “I’m about to cry right now. Seriously.” Saleh continued. “It’s six white people against us bearded men.”

Livid social media users condemned the alleged incident as racial profiling and lashed out at the airline, with thousands using the hashtag #BoycottDelta on Twitter. Others, however, remained skeptical given Saleh’s notoriety as a YouTube prankster. Saleh previously created a viral video that claimed to show a New York City police officer racially profiling two Muslim men, which was later revealed to be a hoax. And last week, he posted a video — watched more than 700,000 times — that  purported to show him smuggling himself inside a suitcase during a flight from Melbourne to Sydney. That was also fake.

For everyone trashing Delta Airlines, story is a hoax, video made by a person who has a history of staging hoaxes. Don't believe the hype!

Jackass makes videos PUNKING people. @delta should sue him to teach others a lesson. This was 100% hoax to smear & slander @Delta https://t.co/OjNLSMN684

If we find out that @omgAdamSaleh committed yet another hoax to smear an airline, Delta should sue and other airlines should ban him.

After being removed from the flight, Saleh continued to post updates on the incident and did not back down from the claim that he was racially profiled. A spokesman for the YouTube star also told BuzzFeed News that the scene was not staged.

We are still stuck at the airport and Delta has not given us any info. They keep telling us to wait. Please spread the word #BoycottDelta

UPDATE: Delta just brought the police to speak to us.

UPDATE: were now on another flight with a different airline heading to NYC after being checked for 30 minutes. We land 5:50pm in NYC

Delta released a statement on Wednesday saying that “two customers” were taken off the flight and later rebooked after “a disturbance in the cabin resulted in more than 20 customers expressing their discomfort.”

“We’re conducting a full review to understand what transpired,” the statement said. “We are taking allegations of discrimination very seriously; our culture requires treating others with respect.”