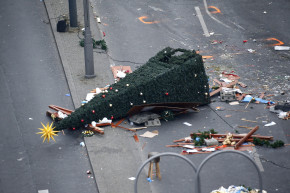 Anis Amri, a young man from the Tunisian city of Tataouine, is the prime suspect in Monday's truck attack

A christmas tree lays on the street at the site of Monday's attack — REUTERS
By Gilad Shiloach with Jacob Steinblatt
Dec 21, 2016 at 8:38 AM ET

A Facebook account that appears to belong to the suspect in Monday’s terror attack in Berlin shows he followed Ansar al-Sharia, a radical and violent Tunisian Jihadi group, Vocativ found.

The suspect was identified as Anis Amri, a Tunisian man around 24 years old from the city of Tataouine, according to CBS News. He was reportedly known to German police, and is currently the object of a massive manhunt.

A Facebook profile, with pictures of a man who matches the photo released by authorities and using that name and similar information, followed the page of the radical group. Ansar al-Sharia is the group that attacked the U.S embassy in Tunis in 2012. The group maintains close ties to global Jihadi groups like al-Qaeda and ISIS, and some of its leaders have pledged allegiance to ISIS leader Abu Baker al-Baghdadi.

The first big break in the investigation came when security forces found the suspect’s ID and asylum papers in his wallet under the driver’s seat on the van used in the attack. Authorities originally had arrested a different man, but released him on Tuesday due to insufficient evidence.

German papers Die Welt and Suddeutsche Zeitung claim the suspect had applied for asylum in Germany in April 2016 and was rejected, but still permitted to remain legally in the country. In addition, he was arrested in Berlin in August 2016 with a fake Italian passport but later he was released.

On Tuesday, ISIS claimed responsibility for the terror attack that killed 12 and injured 48 when a cargo truck rammed into a crowd of Christmas shoppers in Berlin Monday evening, adding that the assailant was a “soldier of the Islamic State, who carried out the attack “in response to calls to target coalition countries.” It remains unclear if the group had any actual hand in directing the attack, or is merely aligning itself after the fact.