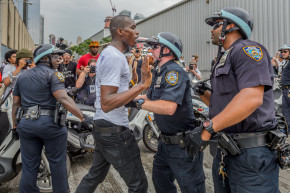 Who Is More Likely To Be Killed By Police? Everyone Who Isn’t White
By Alasdair Wilkins

Who Is More Likely To Be Killed By Police? Everyone Who Isn’t White

A new analysis walks back previous research and shows blacks, Latinos and Native Americans all at higher risk

In the wake of a seemingly endless procession of high-profile cases of black people dying at the hands of police, including Eric Garner, Michael Brown, Laquan McDonald, Tamir Rice, Walter Scott, Freddie Gray, Sandra Bland and more, there have been efforts by both activists and researchers to collect better data on police violence.

Earlier this year, a pair of controversial papers came out that appeared to show that there was no significant racial disparity in police shootings. The study was covered widely, with the results easily misinterpreted by major publications. But the papers didn’t actual say police had no racial bias. They said black men were, yes, much more likely to be stopped, searched and arrested. But among people already being stopped or arrested, whites and blacks were more or less equally likely to be shot, they found.

After the papers, particularly one by Harvard economist Roland Fryer, made national headlines in July, Drexel University researcher James Buehler decided to tackle the subject from a different, more comprehensive angle. What he found, in a study released this week, was that black men really are far more likely to be killed by police than white men — about three times more likely — and so were Latinos, American Indians and Native Alaskans.

“Professor Fryer and I asked and answered different questions,” Buehler told Vocativ in an email. “Fryer’s examination of the likelihood of the use of lethal force focused on whether or not lethal force was used in very high-risk circumstances, such as assaults against police officers or instances when people were evading arrest or interfering in an arrest.”

Relatively few of the high-profile deaths at the hand of police would cleanly fit these categories, and even one that technically does — the shooting of Walter Scott — showed such obvious racism that even Blue Lives Matter, the movement in support of police officers, wouldn’t defend the officer who killed him.

Fryer’s study could only look at a relatively limited dataset, as the city of Houston was the only place where he could get the records needed to answer his question. Buehler instead looked at nationwide data from the Centers for Disease Control and Prevention that tracked all instances of deaths between 2010 and 2014 that were the result of violence on the part of law enforcement. He also calculated the risk of being shot relative to the overall population, not the number of police stops, which makes it easier to see the results of police violence at any point during their interactions with a civilian.

Buehler found that black people died at the hands of police at a rate of 6.8 deaths per million people, compared with just 4.1 per million for Latinos and 2.5 per million for white people. That means black people are about 2.8 times more likely to die at the hands of law enforcement than whites, and Latinos are 1.7 times as likely. American Indians and Native Alaskans, though only a small part of the overall sample, faced roughly the same risk as black people, at 6.9 deaths per million. Buehler said the high rate of Native American and Alaska Native police violence deaths reflected a legacy of poverty among these populations.

As Buehler observes in his paper, police violence is fundamentally a public health issue, given the racial disparities that exist. The question of why the disparity exists is a bigger issue, but the numbers are in, and no matter what you may have heard, black and indigenous people — and, to an only somewhat lesser extent, Latinos — are absolutely more likely to be killed by police than white people.