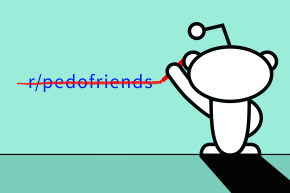 The subreddit r/pedofriends was meant to support non-offending pedophiles, but it went afoul of Reddit's policies

This week, Reddit shut down the subreddit r/pedofriends, a community with the stated purpose of creating a supportive environment for pedophiles who do not want to harm children. The board took an official stance against illegal activities and declared that it was not “a place to advocate for or describe child abuse.”

But it isn’t difficult to find now-archived examples of users discussing “relationships” with children or diminishing the negative impact of child sexual abuse, or deploying highly troubling user names, like “urdaughtersacutie.” And, following a flood of negative comments written by vocal members of the pro-Trump subreddit r/The_Donald, and criticisms that r/pedofriends promoted child abuse, Reddit shut it down.

In a statement to Vocativ, Reddit described itself as “the proud home to some of the most authentic conversations online” and added that the company strives “to be a welcoming, open platform for all.” But, the statement continued, “We are very clear in our site terms of service about content or behaviors that can get users or communities banned from Reddit. We banned this subreddit due to violations of the terms of our policies.”

Reddit didn’t elaborate on how r/pedofriends violated the terms, but a former member of the subreddit provided Vocativ with a screenshot of an alleged conversation between a Reddit administrator and r/pedofriends moderators. The alleged message from the Reddit administrator reads, “We have done some really close looking and have found that people are congregating here and engaging in illegal activity in private. Essentially pedofriends had become a place where people are making contacts to discuss pro pedophilia idea.”

Reddit did not respond to a request for comment on the authenticity of this alleged exchange by press time.

In that same thread, an alleged r/pedofriends moderator wrote, “What do you think is going to happen if you shut down the most vocal opposition to pro-contact”—meaning those who believe it is OK for adults to have sexual contact with children—“and the most vocal support for non-contact MAPs”—meaning, “minor attracted persons,” since “pedophile” is meant to refer to an attraction specifically to pre-pubescent children— “on a very public site?” In other words: What is the impact of removing an online community for pedophiles who are against child abuse?

Similar comments were made by former r/pedofriends users after the subreddit was banned. “This is the worst part about it. Lots of meaningful conversation took place there. A lot of people used it as a platform to explore their most painful emotions and come to terms with who they are,” wrote a user by the name un-lovable. ”RIP pedofriends. You were a great help to a lot of people.”

A few weeks ago, r/The_Donald users took issue with Reddit banning r/pizzagate, which was devoted to the now-infamous conspiracy theory of the same name, which attempted to connect Hillary Clinton to an imagined pedophile ring supposedly run out of the basement of a D.C.-area pizzeria. It was unfair, they said, to remove r/pizzagate while allowing r/pedofriends to remain. Then r/The_Donald commenters began flooding the r/pedofriends subreddit with abusive comments, which forced the subreddit to turn to Reddit admins for help, according to a former member. It’s unclear whether this is what called the subreddit to Reddit’s attention.

The flood of comments from r/The-Donald enthusiasts prompted one r/pedofriends user to start a thread directed at the new visitors: “THIS IS NOT A PLACE FOR CHILD MOLESTERS,” it read. “This subreddit is not meant for attempting to remove or lower the age of consent, it is not trying to legalize child pornography or facilitate the exchange of it or similar media. Users who claim to have abused, are abusing or plan to abuse children are reported directly to the admins. This is a place for support of those with depression, self-doubt or mental health issues. For those who feel like their urges are getting out of hand and need encouragement to get help (or it is unavailable to them).”

The stated mission of r/pedofriends was similar to that of Virtuous Pedophiles, an online community for those who are attracted to minors but are devoted to not acting on their desires. Although, the user un-lovable told Vocativ, “The biggest difference between pedofriends and Virped is that pedofriends actually allowed pro-contact views to be expressed, provided the post was not sexualizing children. Overall though, I would say that the atmosphere of the sub was mostly anti-contact. The mods did a pretty good job of keeping the sub clean and supportive.”

More Instagram Mom Accused Of Exposing Her Toddler To Pedophiles

Now that the subreddit has been banned, it’s only possible to access a limited number of posts through the internet archive site Wayback Machine. In those limited number of posts, there are a few examples of pro-contact views being expressed. In one thread meant to host arguments “for and against pedophilia,” a social worker wrote, “if I get 10 disturbed kids in a week, at least 6 of them got that way because someone couldn’t keep their hands off them.” A user by the name “urdaughtersacutie” responded by arguing that “children with a sexual partner fare better than children without a sexual partner.”

In another case, a user wrote about having a “gf around the age of 11.” He said, “She was absolutely adorable and our relationship was great. Unfortunately someone from her school found out and she started getting teased about it. … Anyways, point is, our relationship was splendid until the weight of the situation became real, and I realised if society finds out I have a relationship with a child, it’s not me who will suffer the most.”

So, despite r/pedofriends’ stated aims, it’s clear that it didn’t always maintain a hardline against discussions of child abuse or the discussion of inappropriate “relationships” with children. But former members of the subreddit who are pedophiles but are resolved to not abuse say they have been cheated of a key source of support. As one of the moderators wrote in the purported conversation with Reddit admins: “What are we supposed to do now? Where are we to go? Why couldn’t you just let us be? We just wanted a place to belong where someone understood? Why did you have to burn down all the progress we’ve been making?”