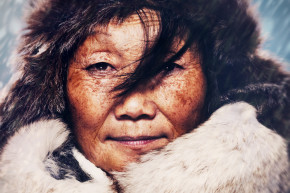 Inuits Are Better At Handling The Cold Thanks To Extinct Humans

When Homo sapiens first emerged in Africa hundreds of thousands of years ago, our ancestors soon discovered that they were not the only humans. As they spread throughout Europe and into Asia, they encountered hominid cousins like the Neanderthals and the Denisovans, and, as genome analysis tells us, started having a whole bunch of sex.

These couplings conferred evolutionary advantages that humans still benefit from eons later. And some of the biggest beneficiaries are Arctic Inuits and others living in some of the world’s coldest places, according to a new study.

While Neanderthals were first discovered in the early 19th century, we’ve only known of the Denisovans since 2010 when a 41,000-year-old bone fragment was discovered in a Siberian cave. Their discovery revealed that, until relatively recently in paleontological terms, our ancestors shared the planet with other, closely related hominids. The Denisovan discovery shattered the last vestiges of the old way of viewing human evolution, which saw a relatively orderly progression from the earliest hominids to our species today, with Neanderthals notable mostly as an evolutionary “dead end.”

Previous research strongly suggests humanity’s Denisovan inheritance includes a boosted immune system and alterations in skin color. The most dramatic example before now was the EPAS1 gene, which enables Tibetans to function at high altitudes and appears to have originated in our hominid cousins. While Neanderthals and Denisovans also originated in Africa, they had developed some invaluable adaptations during hundreds of thousands of years spent in Eurasia before modern humans showed up. The offspring of interbreeding were better able to handle this unfamiliar world because of their mixed heritage.

Researchers at the University of California, Berkeley thought that another Denisovan adaptation might have been the ability to handle cold temperatures — something the Siberia-dwelling hominids would be much better suited to than ancient humans, who had relatively recently left Africa. To test this, the researchers looked at genomic data from 200 Greenlandic Inuits and compared particular genes with Denisovan data.

They found marked similarities in the TBX15 and WARS2 genes, both of which allow the body to increase heat generation from body fat. Indeed, the particular forms of the genes found in the Inuit population are deeply divergent from almost any other human population, suggesting it came from a different gene pool — in this case, the Denisovans, or perhaps another ancient hominid species that also interbred with Denisovans.

The particular forms of these genes are nearly unknown in Africa and relatively rare throughout Eurasia, but  are very common in Inuits and other Native Americans, suggesting the ancestors of America’s original inhabitants picked up the gene as they encountered Denisovans during their long migration. That explains why the genes are still relatively common in other Native Americans and, to a lesser extent, East Asians, but it’s virtually absent in any other human population.

It’s impossible to say just how crucial this inheritance was to survival as ancient humans crossed Siberia into what’s now Alaska and Canada. But it’s conceivable that these genes proved crucial to humans as they navigated frigid terrain far different from their earlier African climates. If not for the existence of the Denisovans, the original settlement of the Americas might have looked very different.