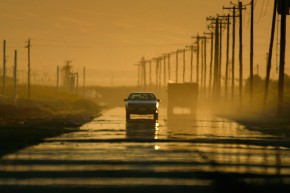 2016 is almost certainly set to become the new hottest year on record, according to both NASA and the World Meteorological Organization. This past year beats out the old record holder of, well, 2015, which in turn beat out the previous hottest year of… yep, 2014. According to the weather trackers at the National Oceanographic and Atmospheric Administration, or NOAA, nine of the 10 hottest years on record have come in the past decade, with only 2008 missing the cut in favor of 1998.

But that’s just the big picture: All over the world, weather stations have reported record-breaking temperatures, with more than a dozen countries experiencing their hottest days ever recorded and the U.S. dealing with scorching temperatures everywhere from the deserts of Arizona and California to far less likely hotspots like Seattle and northern Minnesota. Even now, as the northern hemisphere should find itself in the dead of winter, the record heat continues. The Arctic is experiencing a once-in-a-millennium heatwave, with temperatures at the North Pole up to 20 degrees higher than normal.

Climate scientists are always cautious to say that individual hot days, months, and even years are not necessarily the direct result of global warming alone — El Nino, for example, has made temperatures particularly hot over the past two years, with 2017 set to be a tiny bit cooler now that El Nino has ended. But however you slice it, 2016 was dangerously hot, with excess temperatures putting lives in danger and often stretching vital infrastructure past its breaking point.

Worse, the record-setting heat of 2016 offers a taste of more to come. A recent study from the National Center for Climate Research found that, within the next 50 years, the U.S. will experience 15 new record high temperatures for every one new record low, compared with the current ratio of two to one. Earlier studies have demonstrated that climate change will mean more frequent and intense heatwaves, particularly in cities in higher latitudes that aren’t well adapted to deal with them, and there were already signs of such problems this past year. And a generally hotter planet means lots of cities and countries are now dealing with previously unprecedented temperatures.

Thirteen countries broke their all-time temperature records in 2016, with Kuwait, Iraq, India and Niger all soaring past 120 degrees Fahrenheit. On July 21, Kuwait recorded a high temperature of more than 129 degrees, the hottest temperature ever recorded in the Eastern hemisphere and possibly the hottest in the history of human measurement, since a 134 degree temperature recorded in California’s Death Valley in 1913 is not universally accepted. Both Kuwait and Iraq came perilously close to 130 degrees this past summer. Such temperatures aren’t totally unknown in the Middle East, as Kuwait previously had the world’s hottest temperature in 2011 at 127.2 degrees.

“I was born and raised in Kuwait, and I never get used to that heat!” Faten Omar, a reporter for the Kuwait Times, told Vocativ in a Facebook message. “It’s like living in hell! That’s why you will find people usually go to colder countries to escape the heat.”

Immigration is an understandable response to nearly 130 degree temperatures, and that’s no joke: Researchers earlier this year suggested the Middle East could eventually become uninhabitable, displacing more than half a billion people. What has historically been about 16 days a year of extreme heat — about 115 degrees or higher — could be as many as 80 to 120 by 2050, and a whopping 200 by 2100. Throw in air pollution, and what broke records this year in Kuwait could soon be not much hotter than business as usual.

For now, Omar said most residents spent the summer’s hottest days either at home or in the mall. As a small, oil-rich nation, Kuwait is better suited than most countries to deal with these temperatures, and most of Kuwait has access to air conditioning. Keeping conditions bearable inside when temperatures are so scorching is no easy feat, as Kuwait had to use a record 90 percent of its available electricity to keep its grid powered. But not everyone in Kuwait could necessarily afford to stay inside.

“The heat usually affect[ed] the poor workers who use buses, or work outside,” said Omar. “The government prevented companies [from forcing] workers to work at ‘heat hours’ from 12 pm till 3 pm. But you know when you’re poor you will agree to work whenever!”

The heatwave also had some unexpected effects on local industry. High temperatures can mean less oxygen dissolves into water, suffocating fish who live near the surface. Situated on the Persian Gulf, Kuwait is home to a major fishing industry that found its stock suddenly crippled by the heat. Omar said fish are a key staple of the Kuwaiti diet, leading to soaring prices in response to the shortage.

While Kuwait is wealthy enough to navigate around most of the worst effects of these searingly hot temperatures, other parts of the world aren’t so lucky. India recorded its hottest temperature ever this past May, reaching nearly 124 degrees. That’s hot enough to melt asphalt and turn roads into bubbling tarpits, dry up rivers and lakes, to kill crops before they can be harvested.

Death is an inevitability in such conditions, particularly in poorer regions. The city of Karachi in neighboring Pakistan dug mass graves before the heat-related deaths even began. That might sound morbid until you consider there had been about 1,300 such deaths in Karachi the year before, and cemeteries had not then been prepared to deal with the sudden increase in bodies.

Heatstroke and dehydration were two of the most obvious and most common causes of death, but there were others. Cooking during the day could start deadly fires, leading government officials to attempt to ban the practice. Failed crops caused starvation and displaced tens of thousands of farmers, with hundreds more choosing suicide over a life in heat-stricken slums.

While temperatures typically only turn deadly during the hottest summer months, it’s important to remember that we’re now seeing record high temperatures throughout the year. Looking at monthly temperature records in the United States is instructive: NOAA recorded about a thousand new monthly temperature records across the United States in 2016. Many places dealt with the hottest Julys in their history, but just as many dealt with the hottest April or the hottest October. For example, Phoenix reached 100 degrees in late October this year, part of a general autumn heatwave that led to some of the hottest Halloweens on record. Seattle hit 89 degrees in April — seven degrees hotter than any previous April temperature in the normally coastal, rainswept city.

The construction of modern cities puts them at particular risk for devastating heat waves. This June, when Las Vegas reached an average high of 105 degrees, National Weather Service meteorologist Christopher Outler told the Las Vegas Review Journal that climate change was a factor, but heavy construction and development had a more immediate impact. All that extra concrete and asphalt absorbs heat during the daytime and stores it — an effect called the “urban heat island” seen in cities all over the world. It’s a big reason Phoenix is now experiencing 100-degree days in October, too.

Though heat generally isn’t a deadly threat in the United States to the same extent as in India, scorching temperatures can severely overtax vital infrastructure. Consider southern California, where temperatures climbed above 120 degrees Fahrenheit this summer. With heatstroke-related death a real possibility in such temperatures, state officials scrambled to avoid a power outage by asking residents to run their air conditioners at a still balmy 78 degrees, keep lights off and avoid using appliances during the day. Trains had to run slower because conditions were actually hot enough to cause the tracks themselves to expand, creating delays of up to 45 minutes.

Countries like the United Kingdom didn’t experience temperatures that rival those of the Middle East or the southwestern U.S., but they too had to deal with temperatures far hotter than they are set up to handle. While British temperatures “only” reached the low nineties, that was hot enough to cause an estimated 300 extra emergency calls to the London Ambulance Service alone. And, as the BBC reported, while the country had official guidance on the minimum temperature in which people would be permitted to work, it had no law on the books for the hottest temperatures, forcing the House of Commons to hastily consider what is too hot for outside labor. Concerns over railway tracks expanding caused train delays just as they had in the Los Angeles area, with a rail actually buckling in the heat in northern England.

Even in late December, those high temperatures haven’t really left, with both England and northern Texas celebrating the hottest Christmases on record. Heat is certainly relative here, with England topping out at about 60 degrees while the Dallas area reached a remarkable 80 degrees on December 25.

But there’s at least one place getting a colder than normal winter, and it’s hard to think of anywhere more deserving.

“Even winter in Kuwait is colder this year,” said Faten Omar. “This was my first year actually to wear a fur coat!”