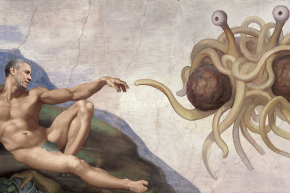 Non-theistic advocacy groups are praising the new act as historic

Obama gets in touch with the nation's flying spaghetti monster side — Photo Illustration: R. A. Di Ieso; original art: Niklas Jansson
By Jennings Brown
Dec 21, 2016 at 10:30 AM ET

When Bill Maher interviewed Barack Obama in November, he prodded the president about the status of atheists like himself. “It just feels like we are not included in the basket of diversity of America, which is odd because we are the biggest minority,” Maher said. “Don’t you think we should get a little more love?”

With a month left in his presidency, Obama has finally given non-religious persons that love. On December 16, Obama signed into law the Frank Wolf International Religious Freedom Act, the first religious freedom bill passed in the United States to offer explicit protection of atheists.

The bill focuses only on atheists living outside of the country. It’s a strengthening of a 1998 religions freedom law, which established the U.S. Commission on International Religious Freedom, dedicated to protecting religious liberty around the world. For 18 years, the office has investigated abuse of Christians, Jews and religious minorities in other countries, but it has never tracked instances of persecution against atheists. Now, the law will also include those who don’t subscribe to a recognized religion. “The freedom of thought, conscience, and religion is understood to protect theistic and non-theistic beliefs and the right not to profess or practice any religion,” the act now states.

The additions also denounce “the specific targeting of non-theists, humanists, and atheists because of their beliefs” as well as attempts to “forcibly [compel] non-believers or non-theists to recant their beliefs or to convert.”

Granted, this act does not protect atheists in America, but non-theistic advocacy groups are hailing the move as a historic step.

The American Humanists Association (AHA), one of several groups that have been lobbying for more inclusive language in the act, praised the changes. “That non-theists are now recognized as a protected class is a significant step toward full acceptance and inclusion for non-religious individuals, who are still far too often stigmatized and persecuted around the world.” Roy Speckhardt, executive director of the AHA, said in a statement. The group also announced the organization’s intention to work with the U.S. Department of Defense to protect religious freedom for religious minorities and non-theists in other countries.

A 2013 report determined that 13 countries threaten to execute citizens who are atheist or do not practice the state-recognized religion. Saudi Arabia recently issued laws declaring atheists to be terrorists. Earlier this year a Saudi man was sentenced to ten years in prison and 2,000 lashes for tweeting about his atheism.