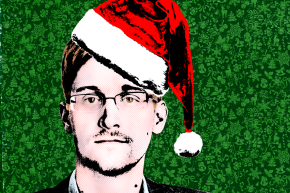 Voicemails are possibly the worst way to relay a message, but a human rights nonprofit wants to use that platform to advocate for a pardon of National Security Agency whistleblower Edward Snowden.

Amnesty International created a “Snowden Out Of Office” voicemail using Snowden’s voice that reminds people they are being watched and recorded by the U.S. government. The group wants people to use it as their voicemail greeting.

“Be advised that this call might be monitored by the NSA and the FBI,” says a female operator before Snowden comes on the phone.

Snowden’s message is then as follows:

“You are being watched and recorded. You don’t have to have done anything wrong. You simply have to fall under suspicion from somebody. They can go back in time and scrutinize every decision you ever made and every friend you ever discussed something with and attack you on that basis.”

The voicemail, as well as an out-of-office email message, are part of a campaign and online petition asking President Obama to pardon Snowden before he leaves office. The voicemail message, which is exactly the same as the email one, is nearly a minute long and it explains that Snowden is being prosecuted by the U.S. for revealing the government’s mass surveillance program.

Snowden is currently living in exile somewhere in Moscow, but he is active on Twitter and occasional live-streams at conferences or participates in TV interviews.