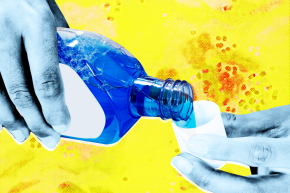 Back in 1879, before the invention of antibiotics, the manufacturer of the mouthwash Listerine made the far-fetched claim that it could be used to fight gonorrhea. This would seem to belong in the embarrassing annals of history — but now, well over a century later, researchers suggest there might be truth to that old claim.

A new study shows that the mouthwash can dramatically reduce the presence of the bacteria that causes the sexually transmitted infection, which is typically treated with antibiotics. Researchers say this discovery — or, perhaps, rediscovery — could have important implications amid rising gonorrhea rates among men who have sex with men, and the growing threat of antibiotic-resistant strains of the STI.

More Gonorrhea May Soon Be Nearly Impossible To Treat

The study tested Listerine’s ability to fight gonorrhea in two different ways. In one phase, a Petri dishes containing Neisseria gonorrhoeae, the bacteria that causes gonorrhea, was exposed to the mouthwash for one minute. Afterward, there was a “significant reduction” in the amount of bacteria. A saline solution, which was used for comparison, had no effect.

In another phase, the researchers recruited 196 men who have sex with men, 58 of whom tested positive for pharyngeal gonorrhea, which is essentially oral gonorrhea. (It’s important to note that research has shown that oral gonorrhea can cause other forms of gonorrhea.) Some were asked to gargle for a minute with Listerine, while some where asked to rinse with a saline solution. Five minutes later, the researchers took pharyngeal swabs. They found that 52 percent of those who swished with mouthwash tested positive for oral gonorrhea, compared to 84 percent of those who rinsed with saline.

More Antibiotic-Resistant Gonorrhea Is On The Rise Again

Now, this doesn’t mean that they were “cured” of the infection. Given that the participants were only tested shortly after rinsing, the researchers, as they write, “cannot exclude the mouthwash having only a short lived effect.” Although they also note that since the amount of bacteria was greatly reduced after a single rinse with mouthwash, “one might expect that daily mouthwash over weeks would potentially reduce the viable number of [bacteria], and hence reduce further transmission.” They say this was the first needed step toward demonstrating any effect from mouthwash on gonorrhea before they can undertake a longer-term study.

The results are preliminary and — regardless of what future research shows — no one should abandon safer sex practices, try to treat gonorrhea without consulting a doctor, or trade regular STI testing for a bulk order of Listerine. But, if it does turn out that daily use of mouthwash reduces the duration of an untreated infection or the possibility of transmission, then the researchers say that “this readily available, condomless and low-cost intervention may have very significant public health implications.”