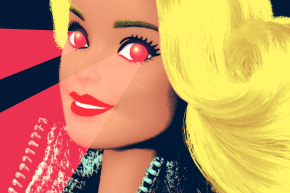 Internet-Connected Toys May Be Great Gifts, But Pose Risks To Kids
By Alejandro Alba

Internet-Connected Toys May Be Great Gifts, But Pose Risks To Kids

Unlike the Elf on the Shelf, the popular toy that pretends to watch if kids are naughty or nice, Internet-connected toys are often actually watching and listening to your children — and that should be concerning to many parents.

Toys belonging to the “internet of things” may be popular this holiday season, but they pose several risks to today’s youth. Smart dolls like Hello Barbie and My Friend Cayla and robots like the i-QUE have been reported to be at risk of getting hacked or being exploited by manufacturers for marketing purposes.

More Talking Toys Could Be Spying On Your Children

Children advocacy groups and privacy firms generally advise parents to avoid buying toys that are connected to the Internet. Not only do they put kids at risk, but they also hinder their creativity and development.

“My hot tip is pretty simple, don’t buy Internet-connected toys,” Josh Golin, executive director of the Campaign for a Commercial-Free Childhood, told Vocativ. “Children have very intimate conversations with dolls in which they reveal personal details about who they are, their parents and other sensitive information.”

Golin said these conversations can be recorded by manufactures or unknown entities and sometimes sent to third-parties. Doing that without parents’ clear consent violates the Children’s Online Privacy Protection Act (COPPA) and Section 5 of the FTC Act, which prohibits “unfair or deceptive acts of practices in or affecting commerce.”

The CFCC, along with other organizations, recently filed a complaint asking the Federal Trade Commission to take action against toy manufacturers such as Genesis Toys that are recording data without consent and sending it to third parties. Under COPPA, parents should have control over their kids’ data and be able to access, review and even delete the data. These organizations are also asking stores like Amazon and Walmart to discontinue one toy, My Friend Cayla, from store shelves.

These issues are not exclusive to just one toy, according to Golin. It’s happening all across the industry.

In the past, toys from the company Vtech have also been reported as targets of cyber-attacks. Other toys that can connect to the Internet but have not had reports of being hacked include the Furby Connect, Fisher-Price’s Smart Toy Monkey, CognitoToys’ Dino and Cloud Pets.

Most of these toy’s terms and services are not displayed on the packaging, which leaves parents blindsided. The CFCC’s complaint to the FTC also asked for some sort of regulation that forces manufacturers to display their privacy policy on packaging rather than on the app’s terms of service — which many people simply don’t read.

The CFCC recommends parents opt out of buying “smart” toys and stick to the classics since they don’t pose any privacy and security risks and they’re just better for the imagination.

“When it comes to toys less is actually more,” Golin said. “The best type of toy is 90 percent child and 10 percent toy, which means that it’s a toy that kids shape with their imagination.”

Susan Linn, founder of the CFCC and lecturer on psychiatry at Harvard Medical School, said the best toys to gift this holiday season are those that promote creativity.

“For young children its best to avoid electronic toys and provide them with toys that really do promote critical thinking and creativity so things like art supplies, blocks and stuffed animals that don’t talk back,” Lin said. “Once a toy starts talking back a child is deprived from the opportunity to make up their own conversation, voice and personality.”

Of course, not all smart toys are bad. Some can help kids learn to code, which is a valuable skill for their future. However, Linn, who has written extensively on commercial marketing effects on children, suggests parents wait until children are eight or nine years old to use coding toys.

“Having a pre-schooler learning to code might sound like a good idea, but it doesn’t give them the space to grow,” Linn said. “Very young children learn best with all of their senses.”

Studies in the past have shown that results for the Torrance Test of Creativity at schools, which is composed of divergent thinking and problem-solving skills, have significantly decreased since 1990. Linn suggest that the results are due to the shift in toy marketing and technology influence.

Parent who still want to buy smart toys for their children, despite privacy concerns, can still try and protect their house from becoming a cyber-attack target. There’s hardware and software such as F-Secure, CUJO and the Luma Wi-Fi Router that add an extra layer of security to home networks.