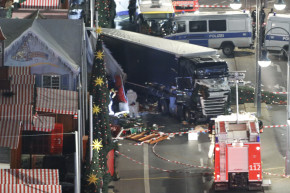 ISIS is claiming responsibility for a terror attack that killed 12 and injured 48 when a cargo truck rammed into a crowd of Christmas shoppers in Berlin Monday evening. The German authorities arrested a suspect after the attack, but later released him, citing insufficient evidence. A manhunt for the perpetrator is still ongoing.

The terror group called the assailant, whose identity remains unknown, a “soldier of the Islamic State,” using a stock phrase they often uses to praise attackers. The statement also declared that the Berlin attack was “in response to calls to target coalition countries” from its media apparatus, the Amaq News Agency. It’s not known if the group had any direct hand in planning or executing the attack, or if, as is often the case, they are retroactively claiming the violence of an individual.

The event unleashed a wave of celebration among ISIS supporters online, who praised the driver, saying that “the calls to target Christians bear fruit with the praise of God.”

Chancellor Angela Merkel, dressed in black, spoke at the site of the attack on Tuesday, calling it an act of terrorism. Germany’s Die Welt newspaper reports that in the days prior to the attack, German intelligence agencies received indications of an imminent attack on a Christmas market in the German capital.

The attack took place in front of Berlin’s historic Kaiser Wilhelm memorial church near the Kurfürstendamm shopping street in the heart of former West Berlin. It was reminiscent of a July attack in the French coastal city of Nice, in which 31-year-old Mohamed Lahouaiej-Bouhlel, originally from Tunisia, plowed a truck through a large crowd watching fireworks in celebration of Bastille Day, killing 86 people.