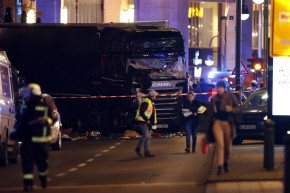 Multiple casualties and dozens more injuries have been reported

A large cargo truck plowed through a crowd of Christmas shoppers in Berlin on Monday night, killing at least 12 people and injuring dozens of others, according to Berlin police.

At around 8 p.m. local time, reports streamed in of a large trucking ramming through a Christmas market outside of the Kaiser Wilhelm Memorial Church, crashing through stalls aligned parallel with the street.

Police have initially said they believe this is an attack. A suspect, believed to be the driver, has been arrested. The passenger in the truck died at the scene.

Facebook has turned on its Safety Check feature for the incident.