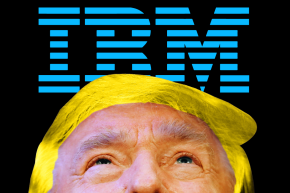 An internal feud at IBM has gone public as employees at the computing giant released a petition rejecting their CEO’s recent congratulatory letter to President-elect Donald Trump.

The IBM protest began after CEO Ginni Rometty published a letter personally offering the company’s services to Trump, who campaigned on a racist and anti-immigration platform. Soon after the letter, one employee publicly quit in protest. Now, her colleagues have launched the petition, which is currently signed by more than 50 IBM employees.

“We are disappointed that IBM CEO Ginni Rometty’s open letter to President-elect Donald Trump does not affirm IBMers’ core values of diversity, inclusiveness, and ethical business conduct,” reads the statement at IBMPetition.org. “For our mutual aid and protection, we call on IBM to expand diversity recruitment programs, and we assert our right to refuse participation in any U.S. government contracts that violate constitutionally protected civil liberties.”

The petition comes as there is growing tension around the early relationship between tech companies and the incoming administration. Several companies were asked whether they would refuse to help Trump build a registry of Muslims in the United States — a goal he has talked about pursuing — and most initially didn’t give a clear answer (after criticism, a number of companies have now said they would refuse). And last week, leaders in the tech industry received a friendly reception from Trump at a closed-door meeting in New York City.

IBM’s technology would be an especially powerful weapon in Trump’s hands if his administration follows through on campaign promises for mass-deportations and the targeting of Muslims and minorities. The company’s artificial intelligence and big data platforms are already offered to government and law enforcement agencies, boasting the power to predict threats and gather intelligence using advanced computer vision, among other feats.

The employees’ petition joins a “Never Again” pledge that has now been signed by more than 2,200 tech workers, in which employees of companies including Google and IBM vow to never help Trump build a database of Muslims. The pledge specifically noted IBM’s history of collaborating with authoritarian regimes, including how the company’s technology helped facilitate the genocide of millions of Jews and others during World War II.

“We have a moral and business imperative to uphold the pillars of a free society by declining any projects which undermine liberty, such as surveillance tools threatening freedom of speech, freedom of assembly, and freedom from unreasonable search and seizure,” the IBM employees write in their open letter to the company’s CEO. “The kinds of moral decisions you and our senior executives make in the next four years will define our corporate character for our next century. This will be your legacy.”