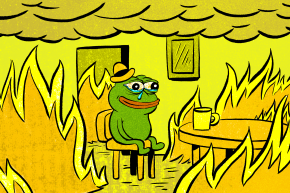 The Darkest, Dankest Year In Memes
By Allee Manning

The Darkest, Dankest Year In Memes

How could we have possibly made it through 2016 without shitposting?

Humans have always found a way to laugh through the pain, but 2016 was the year that internet culture truly managed to take the defense mechanism to new heights. And one of the main vehicles for this outpouring of despondency was internet memes.

As Vocativ has shown in the past, negative or pessimistic memes have given rise to communities where depressed people can band together and commiserate online, especially on “Weird Facebook.” But what used to be a somewhat fringe function of the internet’s favorite way of communicating has made its way to the mainstream, and 2016 was the year that memes took a turn into the dark and twisty on the whole.

The trend towards memes that convey nihilism or antagonism can be exemplified by the number one meme chosen to represent the year, as voted upon by readers of “Know Your Meme,” the online meme encyclopedia, “We Are Number One.” It spun off a song sung by a children’s television villain who teaches his slightly demented clones to be evil. The self-congratulatory lesson in being sneaky and mean inspired hundreds of parodies. While a campaign launched to help the actor, who had been diagnosed with cancer, capitalized on the meme’s spread and helped it reach peak popularity, it’s notable that the original message of the song itself was not so nice. (For reference, last year’s reader’s choice meme went to John Cena, who is, by all accounts, a lovely person immortalized now in a good-natured and benign meme.)

Aside from “Dat boi,” the cartoon unicycling frog, which is primarily used for the purpose of sheer absurdity in traditional meme fashion, the most-searched meme created in 2016 (according to its 2.5 million page views on Know Your Meme) was Harambe the Gorilla. The host of takes stemming from this meme vary, sure, but it’s probably fair to say that Harambe is one of the bleakest memes of the year. For those unaware, the meme centered around pseudo-mourning a gorilla that was shot dead at the Cincinnati Zoo after a child climbed into his enclosure.

“The web loves negativity,” said Kenneth Goldsmith, a professor of English at the University of Pennsylvania. Goldsmith teaches a class called “Wasting Time On The Internet,” which delves heavily into internet culture. “Social media has turned us into a culture of critique, and critique and joy don’t exactly go hand in hand.” He added that in this particularly heated time in politics, it’s unsurprising that both critique and negativity are being so spread hand-in-hand across the social media platforms where they’re shared.

Brad Kim, editor of Know Your Meme, echoes this assessment and believes the widespread shift towards more cynical memes can be largely attributed to the current political climate. He notes that while meme culture first grew out of liberal and left-leaning online communities, conservative online communities in direct opposition to these ideals have now co-opted meme culture, leading to a whole new world of incendiary online content.

“Steady advances in social justice activism have given way to several reactionary movements, such as men’s rights activism and the alt-right movement, homegrown through popular online communities like Reddit,” he told Vocativ in an email. “Memes are now being used as the weapon of choice by partisans on the both sides of the aisle, which inevitably led to a whole lot of flame wars driven by tension and antagonism.”

Debates of identity politics and social justice, amplified by the politics-heavy year, may also have contributed to a particularly contentious meme culture in 2016.

In addition to the rise of the new memes that were created in 2016, Know Your Meme shared the most popular “sleeper memes” — memes that undergo “an extensive period of dormancy before suddenly rising to popularity in a drastically short period of time” — with Vocativ, to reveal a similar trend. “We’ve documented the late bloom of quite a few sleeper memes in the past, but not as many or frequently as we’ve seen in 2016,” Kim said, attributing the trend to the exponentially growing volume of reposted content online.

Unsurprisingly, the most popular sleeper meme was Pepe the Frog, which was co-opted by the self-described “alt-right” movement for the purpose of promoting their message of white supremacy a full seven years after its original inception. When the cartoon frog was first introduced to the web, it was as a kind of blank-slate comic book character, used to convey whatever emotion those who recreated him wanted. Sometimes he was sad, sometimes he was angry, sometimes he was Christmas-themed, but he was never political, until he was. This year, Pepe became such a symbol of these groups’ messages that the Anti-Defamation League formally named it a hate symbol back in September.

It’s an example of the kind of reappropriation that Kim says took root in the early 2000s, thanks to the technological breakthroughs in consumer-grade electronics, media editing software, and creation of new social media platforms during this time. Goldsmith also reflects on how Pepe’s new branding (for the worse) is a sign of the times.

“Back in the day the Dancing Baby, which was like the first meme, was adorable,” he said. “The web was adorable, it was cute. And so the meme wasn’t viewed as critical. It was just amazing to see how warm the computer could be at that moment, and then that vanished. The dancing baby meme would never go anywhere [today]. Unless it was usurped by [anti-choice] or pro-choice people that put another meaning on it.”

The “This Is Fine” Dog meme was another major sleeper hit of the year, originally created in 2014 but rising to prominence just as Donald Trump did. Demonstrating complete denial of reality in the face of utter catastrophe, it very clearly struck a nerve with many Americans who felt helpless during the presidential election. A timely update from the original artist, published by The Nib in August, reimagined the cool, calm, and collected dog finally taking heed of the situation at hand and completely freaking out over it once it’s too late to fix the damage incurred.

Of course, not every meme birthed or resurfaced this past year was negative. There’s even been an entire community for “wholesome memes” created in apparent pushback to the current state of the internet’s despair, now thriving on Reddit. And we’d be loath to forget 2016 highlights like “Arthur,” from the children’s TV show (though his creators weren’t so thrilled), “Don’t talk to me or my son ever again,” and the video compilation “Damn Daniel.” These widely-covered, largely good-natured memes likely helped contribute to the massive popularity of memes this year: According to Know Your Meme’s annual “State of the Internets” report the word “meme” was searched for on Google more frequently than “Jesus” or “God.” For better or for worse, it seems that Dat Boi, Pepe, and the This Is Fine dog are our new deities.