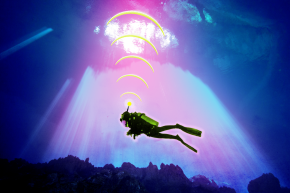 The Military’s Quest To Send Texts Below Ground And Underwater

You can send text messages, GIFs, and a cartoon version of yourself from virtually anywhere on the planet, thanks to networks of millions of satellites and antenna towers. But if you’re underground or underwater, wireless communication is still nearly impossible. The U.S. military hopes to change that with a new DARPA initiative.

On December 16, the Department of Defense’s research agency announced the AMEBA program, which stands for A Mechanically Based Antenna. It aims to develop technology that could allow people to exchange messages even if they’re off the grid.

Usually, wireless communication depends on radio signals between transmitters and receivers, but those signals don’t travel well through conductive materials like water, rocks, and soil. Thanks to these limitations of physics, submarines depend on an arsenal of communication devices just to function, scuba divers use hand signals and New Yorkers still don’t have cell coverage in the subway system after years of empty promises,

AMEBA would rely on ultra low frequency (ULF) electromagnetic waves that are still able to pass through earth, building materials and water. “If we are successful, scuba divers would be able to use a ULF channel for low bit-rate communications, like text messages, to communicate with each other or with nearby submarines, ships, relay buoys, UAVs, and ground-based assets,” DARPA program manager Troy Olsson said in a statement. “Through-ground communication with people in deep bunkers, mines, or caves could also become possible.”

The system could get a boost from very low frequency (VLF) signals, which are a slightly higher frequency than ULF and act like radio waves within the highest part of the Earth’s atmosphere. “Because of that atmospheric waveguide effect, VLF systems might ultimately enable direct soldier-to-soldier text and voice communication across continents and oceans.” Olsson said.

The challenge lies in the fact that longer wavelengths require super tall antennas. During the Cold War, the U.S. Navy built a VLF transmitter system in Culter, Maine, which takes up about 2,000 acres and consists of 150 buildings and 26 antenna towers that reach 800 feet to 1,000 feet into the air. This is the most powerful radio transmitter in the world, but it is only able to share simple coded text messages with submarines.

Olsson believes DARPA can build VLF and ULF transmitters that are small and light enough that they can be carried by soldiers and used in all sorts of terrain.

The proposed system would create signals by mechanically moving materials with strong electric or magnetic fields at a rate that generates the required lower frequencies. This would require chemistry and engineering breakthroughs that could allow developers to put more powerful electromagnetic fields into smaller volumes, but Olsson is optimistic.

“If we do catalyze the innovations we have in mind, we should be able to give our warfighters extremely valuable mission-expanding channels of communications that no one has had before,” Olsson said.