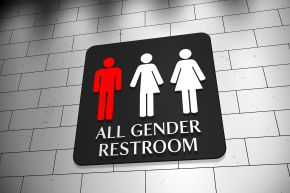 It’s Men, Not Women, Who Are Worried About Trans Bathroom Rights
By Tracy Clark-Flory

It’s Men, Not Women, Who Are Worried About Trans Bathroom Rights

When it comes online comments, men are more likely than women to express outrage at transgender women in female restrooms

The rhetoric around the recent wave of proposed “bathroom bills,” which aim to prevent transgender people from using the restroom consistent with their gender identity, is often about protecting women. But, according to a new study, it isn’t women who are most concerned about the idea of trans women in female restrooms — it’s men.

The study, published in the journal Gender Issues, reviewed 1,035 online comments specifically about transgender women using women’s bathrooms. The comments, which came from nearly 200 articles, were coded according to whether they were negative or positive. The negative comments were then categorized according to those that expressed concerns about either a causal or incidental link between transgender women in female restrooms and safety or privacy. In most cases, the researchers were also able to categorize the remarks according to the gender of the commenter, using things like usernames or a linked Facebook profile for verification. (In some cases, they only had unconfirmed suspicions about the gender of the commenter, and that group was considered separately.)

“We theorize that the heightened concern seen in males in these comments stems from them being more likely to view transgender females not as females, but as males who are lying or mistaken about their gender, and consequently they view themselves as protecting females from these males intruding into private, female-only spaces,” write the researchers. “This may be further exacerbated by a fear of deception and a belief that transgender people are mentally ill or ‘sick’.” The researchers also point out that past research has consistently shown that cisgender men are far more transphobic than cisgender women.

More Most Trans Americans Are Afraid To Use Public Bathrooms

The researchers also note that “user comments suggests the male gender role of the protector as having an influence on male transphobia, which is indicated by their comments.” For example, one cisgender male commenter wrote, “I have a teenage daughter and I demand that her privacy is protected from a gender-confused pervert that might walk in on her while she’s in the restroom!” Said another, “If that transgender male walked in on my wife, I would finish his transformation.” And another, “I’d pull my daughter out of school before they’d let some pervert in the locker rooms and bathrooms claiming he’s transgender!!!” But this data suggests that daughters and wives aren’t nearly so concerned: 70 percent of the cisgender women in the sample posted non-negative comments about the topic of transgender women in women’s restrooms.

Now, of course, internet commenters are not representative of the world at large. “Often, what prompts a reader to comment on an online news article is an intense interest or a passionate emotional response,” the researchers write, “and while most Internet users read online news articles, they do not tend to comment.” The researchers believe that in the real world, you might see a smaller percentage of people who are concerned about transgender women in public bathrooms, but that cisgender men will still be shown to be more concerned about the topic than cisgender women — but more research is needed. At least for now, we can say that in the incendiary realm of online commenting, it’s men, not women, who are most in opposition of transgender bathroom rights.