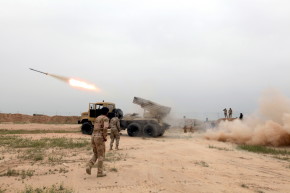 The group claims it has carried out 215 suicide attacks and killed almost 5,000 people during two months of battles

Iraqi soldiers fire a rocket at Islamic State militants outside Mosul — REUTERS
By Gilad Shiloach
Dec 19, 2016 at 10:54 AM ET

As the U.S.-backed offensive to capture the most important ISIS stronghold in Iraq enters its third month, ISIS is far from raising the white flag.

The group claims it has carried out 215 suicide attacks and killed almost 5,000 people during two months of battles. The numbers, which couldn’t be independently verified, were published late on Sunday by the Jihadi group’s Amaq News Agency to mark the second month of the operation in Mosul, Iraq’s second-biggest city, which was captured by the terror group in June 2014.

ISIS also claims it has killed 4,971 militants from the Iraqi army, Kurdish militias, and the Iranian-backed Shiite militias, known as The Popular Mobilization Units (PMU). Figures couldn’t be confirmed, but a senior Pentagon officer told Politico last week that the battles between ISIS and the Iraqi forces are so intense that the Iraqi Special Forces battalions are suffering “horrific” losses — “upwards of 50 percent casualties” — raising concerns that the division could become ineffective in a little over a month.

Alongside casualties, ISIS claims it has managed to destroy more than 800 military vehicles belonging to the local Iraqi forces fighting against it, among them 32 American Abrams tanks used by the Iraqi army and 21 drones.

The Iraqi PMU released their own numbers on Saturday to mark two months of battle against ISIS. According to their figures, 450 ISIS fighters were killed fighting in Mosul and 122 villages were liberated from the hands of the terrorists.

According to the International Organization for Migration (IOM), two months into the Mosul operation, more than 106,400 individuals have been displaced. IOM’s Iraq Chief of Mission Thomas Lothar called on donors, humanitarian partners and the Iraqi government to help to provide shelter to the displaced in the cold winter weather and rain.

According to Reuters, ISIS fighters have stepped up counterattacks on Iraqi forces in Mosul amid bad weather, and at the current pace of advance, the offensive is likely to extend into next year, beyond the initial forecast of Iraqi Prime Minister Haider al-Abadi, who promised to liberate it in 2016.

The operation, launched in mid-October, is led by the Iraqi army, the Kurdish Peshmerga militias and Iranian-backed Shiite forces on the ground, alongside U.S and other foreign air support. More than 100,000 militants are reportedly taking part in the operation, the largest offensive in Iraq since the U.S. invasion of 2003.

Clashes between ISIS and Iraqi fighters in Mosul’s Tamim District