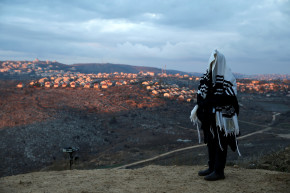 A man prays in the Jewish settler outpost of Amona in the West Bank — REUTERS
By Gilad Shiloach with Mor Turgeman
Dec 18, 2016 at 9:55 AM ET

Israel’s far right is celebrating Donald Trump’s pick for the next U.S. ambassador to Israel: David Friedman — a lawyer with no diplomatic experience who staunchly opposes a two-state solution.

Friedman, 57, an Orthodox Jew and Hebrew speaker, is a bankruptcy lawyer in New York whose extreme views put him far to the right of decades of U.S. policy towards Israel. He has endorsed the Israeli settlements in the West Bank and doubted the need for a two-state solution to the Israeli-Palestinian conflict. After news of the appointment broke, Friedman said he was looking forward to working out of “the U.S. embassy in Israel’s eternal capital, Jerusalem.” (The U.S. embassy is in Tel Aviv, since both Israel and Palestine believe Jerusalem is their historical capital.)

Settlers and their supporters have been effusive in welcoming the appointment. The Yesha Council, an umbrella group that represents the Israeli settlements in the West Bank, praised Friedman, citing his “knowledge and wisdom of the issues.” A right wing former Israeli MP, Arieh Eldad, said he “can recognize a real messianic euphoria” among West Bank settlers, while an Israeli Facebook user affiliated with the country’s right hailed Friedman’s support for the settlements, writing that the pick makes “dreams come true.”

Others, noting that Trump’s son-in-law is an Orthodox Jew, celebrated “Trump and his Jewish grandsons in he White House” — writing that, along with “an American ambassador who is a ‘settler,'” this is the true sign that Trump is “making America great again.”

Senior Palestinian officials, on the other hand, decried Trump’s pick. The secretary general of the Palestine Liberation Organization specifically said Friday that Friedman’s plan to move the embassy before a final agreement on the Palestinian-Israeli conflict “will be the destruction of the peace process.”

And in Israel, not everybody is happy with the choice. A left-leaning social media user said Friedman’s ideology “is another national Jewish disaster with an American passport” and blamed Trump for “strengthening Netanyahu.” Zehava Galon, the leader of the left-wing Meretz party said that Friedman’s appointment is “catastrophic” and added that “Netanyahu couldn’t have wished for a better ambassador.

David Friedman is the U.S Ambassador in Israel. Hallelujah

Trump’s transition team announced the planned appointment of Friedman on Thursday with a statement describing him as “one of the President-elect’s principal advisors on the US-Israel relationship during the campaign.” It went on, writing that “with Mr. Friedman’s nomination, President-elect Trump expressed his commitment to further enhancing the US-Israel relationship and ensuring there will be extraordinary strategic, technological, military and intelligence cooperation between the two countries.”