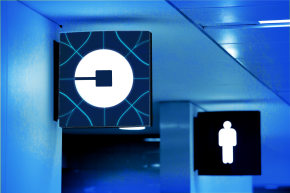 Uber Drivers Petition For Bathroom At JFK After Peeing In Bottles

Uber drivers are tired of peeing in plastic bottles and behind bushes in public places. The Independent Drivers Guild, a union that represents for-hire drivers, started an online petition that asks for the installment of a restroom for drivers to use at New York City’s John F. Kennedy International Airport.

The petition asks Port Authority, which operates the airport, to install and maintain a portable restroom in the cell phone lot, the parking space designated for Uber, Lyft and Gett drivers to wait in line and pick up passengers.

“It’s a grim situation in the waiting lot,” said Sohail Rana, Uber driver & IDG committee member, in a statement. “Half-filled bottles of questionable origin and odor litter the cell phone lot, where the only place to go to the bathroom currently is a section of the parking lot where there are a few anemic bushes.”

For-hire drivers currently have to find clever ways to urinate or travel at least two miles to find the nearest restroom, according to IDG’s executive director Ryan Price. Meanwhile, licensed taxi drivers have access to restroom facilities, and so do pets.

“Drivers are being treated worse than dogs,” Price told Vocativ.

Those who leave to find a bathroom risk loosing their spot in the queue after 30 minutes, which means that they’ll have to wait some time again until they can pick up passengers and gain some money. Price said the guild is currently scheduled to meet with Port Authority to try and figure out where a restroom can be placed and find the funding for its maintenance.

“I would hope that by summer 2017 we’ve figured out money and who’ll maintain it,” Price said. “I hope the conversation is easy and everyone plays along and we realize that it’s a big issue affecting everyone.”

The guild’s idea of a restroom is as simple as installing a porta-potty, but ideally it would like to install a bathroom trailer with clean water. Price said that sanitation is very important to the guild and would like to keep drivers healthy. Another thing the guild wants to provide for drivers is a place to wash their feet, since many of them pray in between rides.

Drivers who don’t leave to use the restroom have found unique ways to take care of their basic needs and still be able to do their job. Some drivers tend to use adult diapers, according to Uber forums on Reddit and Uberpeople.net.

Other drivers in the forums share tips on which type of plastic bottle is better to pee in. “Gatorade is the best pee pee bottle,” is the title of one of the many forums trying to solve this conundrum. Then there are those drivers who have “taxi cab syndrome” and simply try to hold their pee, but that is generally a terrible idea for their urinary tracts, bladders and even reproductive health.

Compared to other New York City area airports, JFK is the only one with a big lot and no restrooms. At the city’s LaGuardia Airport there is a portable toilet and a 7-Eleven nearby, so it’s not as dire for the guild to fight for a restroom installment. However, Price said he would want to also ask for a restroom there in the future.