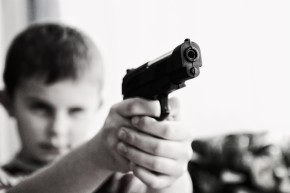 Study: Teen Violence Spreads Like A Disease
By Ed Cara

It’s long been said that violence begets violence, but a new study published Tuesday in the American Journal of Public Health has found that it’s especially contagious among teens.

Researchers pored through data taken from the National Longitudinal Study of Adolescent Health, an extensive survey of more than 90,000 children in grades 7 to 12 that first began in 1994. They keyed in on a smaller group of in-depth interviews conducted every few years, allowing the researchers to track the social networks of nearly 6,000 children. What they found was that kids were more likely to participate in violence in the last 12 months if either their friends or siblings were also violent.

“We now have evidence that shows how important social relationships are to spreading violent behavior, just like they are for spreading many other kinds of attitudes and behaviors,” study author Brad Bushman, professor of communication and psychology at Ohio State, said in a statement.

Elsewhere, other research has long shown the contagious nature of violence. For example, people abused in their childhood being more likely to be abusive parents themselves.

In this study, not only did the link hold firm across different forms of violence, from relatively mild to life-threatening, but it didn’t need especially close contact to show up. Even having a friend of a friend commit violence was associated with a greater risk of someone committing violence themselves, though to a lesser extent than with simply having a violent friend. And for the mildest form asked about, getting into a serious fight, the pattern could be seen through four degrees of separation (the friend of a friend of a friend of a friend).

It should be said the contagious effects of violence are impressive-sounding but need to be taken in context. For instance, though kids were 140 percent more likely to report pulling on a gun or knife on someone if their friend had done so, only 3 percent of kids at all said they did something like that in the past year (when asked about it in the second wave of interviews). Twenty percent said they had gotten in a serious fight and 6 percent said that they had hurt someone badly, with the likelihood of doing so jumping up by 48 percent and 183 percent respectively if their immediate friends had done it too.

Though studies like these can’t prove a clear cause-and-effect links, Bushman and his Ohio State co-author Robert Bond, an assistant professor of communication, do think there are practical lessons in their findings.

“If we can stop violence in one person, that spreads to their social network. We’re actually preventing violence not only in that person, but potentially for all the people they come in contact with,” Bond said.

As a model, the pair single out anti-violence organizations like Cure Violence, a non-profit doing work in several states and countries since 2007. Their program flat out compares violence to diseases like HIV/AIDS, and tries to adopt the same sort of strategies of disease control. Their three-step model involves finding and stopping potential outbreaks of violence, reaching out to people who are at most at risk and offering them rehabilitation or social services, and changing community perceptions in order to stop violence from being seen as normal.

So far, the results testify to their approach. A study out of Johns Hopkins University and funded by the CDC found that the program had reduced rates of shooting violence and homicides by 34 to 56 percent in the Baltimore communities where it was implemented starting in 2007.