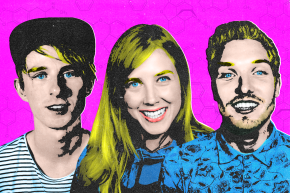 10 Million People Have Watched These YouTubers Get High

The hosts of this YouTube channel do drugs so you don't have to. All in the name of education

After running down some facts, figures, and warnings about a tan chunk of 3,4-Methylenedioxymethamphetamine — better known as MDMA or Molly, a psychoactive stimulant popular with partiers the world over — Nellie Benner and Bastiaan Rosman play a game of rock, paper, scissors. The loser will take the Molly, for science. Rosman throws down a paper and Benner throws down a rock. Bottoms up for Benner.

Over the next 10 minutes, the pair, one sober and one rolling, hang out in a sleek TV studio science lab and discuss the effects of the drug. Benner gets progressively loopier and hyperactive, briefly breaking into dance at one point, while Rosman keeps her company and monitors her actions, heart rate, and temperature. “How does your body feel now?” Rosman asks in Dutch. “Everything feels smooth and warm,” says Benner. Her pupils look like saucers and her jaw is steadily clenching.

Benner plays some simple children’s games, drinks a healthy fruit smoothie, and rides out the rest of her trip. In the next clip, filmed the day after, Benner describes, confessional-style, how she’s feeling 24 hours removed from her MDMA experience. “When the drug wore off, I had to pee non-stop. Not just a little bit, but a lot. All the fluids left my body,” Benner says. “I feel fine now.”

So concludes another episode of Drugslab, an educational Dutch YouTube show that covers the world of mind-bending intoxicants — from marijuana and caffeine to 2C-B and GHB — by having its hosts try them on camera. Drugslab is funded by BNN, a public broadcasting station in the Netherlands. Benner, 30, Rosman, 23, and Rens Polman, 25, are the three faces of the program, and on a given episode, two of them will team up to teach viewers about a specific drug.

The hosts speak Dutch on the show, but English subtitles are provided for international viewers. “On this YouTube channel we will take in the drugs you want us to try,” the channel’s description reads in English. “We do this in the name of science so we can show you what the effects of drugs are on the human body.”

The channel is part of BNN’s “Spuiten en Slikken” (“Shoot and Swallow”), a program about sexuality and drugs that has been on the air in the Netherlands since 2005. “Today Spuiten en Slikken is the most valued program about sex and drugs on the Dutch television for youngsters,” a spokesperson for Drugslab told Vocativ in an email. “No similar program existed on [YouTube], so with Drugslab, we fill the online gap.”

Drugslab debuted on September 8, with new episodes posted every Friday at 5 p.m. Each of the 45 spots so far include a new drug and a “Do’s and Don’ts” episode for each substance tested, as well as an introduction to the channel. Most recently, the team tested out some OxyContin, a powerful prescription opioid pain reliever (Benner took it this time).

And it’s looking like a hit: in the short time that it’s been online, the channel has amassed a staggering 9.8 million views and 329,000 subscribers, with some episodes getting up to hundreds of thousands of views. “Rens tries Ecstasy” is Drugslab’s most popular episode so far and has been watched more than 932,000 times.

For a program that deals intricately with the wide world of intoxicants, none of the hosts have particularly druggy backgrounds. Benner is an actor, Polman works on other YouTube projects, and Rosman is a third-year media studies student. Despite their disparate backgrounds, each host was brought in to the fold by the show’s producers. After Benner interviewed for the position, she said she “immediately felt at home.” The others voiced similar sentiments.

All three say they’re enjoying their on-air experiments. Polman told us that ecstasy was far and away his favorite drug that he ingested on Drugslab. “The vibe was very good and pleasant, I felt really happy. I had a great time with the team and I could not stop cuddling everyone,” he said. For Rosman, ketamine was particularly fun. “You feel very energetic and your body feels like elastic that was really very special,” he said. Benner expressed her appreciation for 2-CB. “I found that really funny, without fierce side effects or after dips,” she said. “It only gave me a bit of a headache.”

In addition to providing a platform for experimentation and education, Drugslab is a bit democratic. In order to determine which drug will next enter one of their bodies, the three hosts look to the comments section of their videos. “We review what the viewers want to watch,” Polman says. But still, there are limits. “In principle we are open to all the drugs that we want to try. But if there is something that someone does not want to do, that person can of course indicate this. Has not happened yet by the way.” Polman, for instance, maintains that he will never try heroin, crystal meth, “or any other drugs that make you become an addict almost immediately.”

Because of the country’s lax attitude and laws toward recreational substances and famous marijuana coffee shops, the Netherlands has a reputation as a drug paradise, at least among the college-aged backpackers who flock to Amsterdam. In reality, Holland has one of the lowest rates of hard drug use in all the European Union, and other research has found that Dutch citizens use cannabis at lower rates than many of their European neighbors.

That said, the hosts of Drugslab don’t see themselves as promoting drug use or contributing to that national stereotype. “I am glad that I can inform people across the world about drugs and how to use these safely,” Rosman says. “And yes, we happen to be Dutch but personally I receive messages of people from other countries who are glad that we do this, as it is not allowed in their own country and therefore a lot of information is missing.”

Regarding whether or not Drugslab glorifies substance use, Benner says that the program clearly states the pros and cons. “I believe that informing is better than keeping silent, after all we are living in an era where youngsters get in contact with drugs regardless,” she says.

Polman adds that he would like Drugslab to break the taboo of discussing drugs — especially among kids and families who may be reticent to do so. “The videos are both for worried parents as for people who want to experiment with drugs. Besides that, they have to be nice videos to watch, of course, we also inform people so they know what they should not do or should do with a certain drug,” he says.

Eberhard Schatz, of Foundation De Regenboog Groep, an Amsterdam-based NGO committed to helping drug users and homeless and mentally ill people, lauded Drugslab and its approach to educational programming. “It’s a good idea because providing information by peers is much more credible than boring teacher talk,” he told Vocativ in an email. “The information given in the program is balanced, realistic, and reliable.”

As far as whether Drugslab promotes drug use too positively and further stereotypes the Netherlands as a haven for illicit substances, Schatz says that only focusing on the negative aspects of drug use is a losing strategy. “Empirical knowledge shows, that prevention messages on the dangers of drugs, excluding positive aspects are regarded as implausible by young people,” he said. “[There is] nothing wrong if the Netherlands [can] provide a pragmatic and realistic view on substance use.”

Schatz says he think a show like Drugslab would be beneficial for international audiences, particularly in the United States, for a number of reasons. “It gives an important role to peers, [it] addresses positive and negative effects of particular substances but is not ‘demonizing, [and] it takes away some prejudice towards drug users (they’re people like me and you),” he told Vocativ. “Of course, given information has to be carefully prepared and it has always to be highlighted that drugs differ in composition [and] impact differs from person to person.”

As for what’s next for Drugslab, the hosts say that they’re happy in the direction that the show has gone in so far but are unsure of what the future holds (except for more drug-testing, of course). “We only started [four] months ago and we already have more than 200,000 subscribers,” Rosman says. “That really makes me super proud and we are far from finished with Drugslab.”