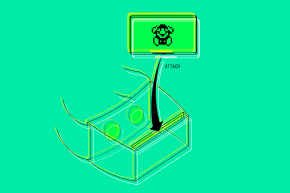 Is Nintendo Going Into Virtual Reality With The Switch Console?
By Alejandro Alba

Is Nintendo Going Into Virtual Reality With The Switch Console?

A patent has a design for an oversized VR headset

Nintendo announced its latest video game console in October, but the company might’ve kept some of its features a secret. A patent for Nintendo’s Switch reveals that the console might come with a virtual reality headset similar to the Samsung Gear VR or Google’s Daydreamer.

The highly-anticipated Switch is a gaming console that can be used as a handheld device or a stationary home system, allowing players to constantly go back and forth between gaming styles without interrupting actual gameplay — hence the name. Although it’s not entirely revolutionary, the Switch seems very promising and superior to its predecessor the Wii U, which is no longer in production.

The patent, which was posted on gaming forum NeoGAF, includes a drawing illustrating how the Switch tablet can be inserted into an oversized VR headset.

The drawing does not provide much context, but that patent said it could “enhance the sense of immersion” as opposed to playing games on a large flat screen. It’s hard to imagine a tablet measuring 5.7 x 3.2 inches transforming into a headset — it’s basically the size of the consumer’s face — but the makers of the console have previously expressed interest in VR.

“If you asked as if this might be possible in the future, certainly we can’t say no,” President of Nintendo Tatsumi Kimishima told Bloomberg in October. “I can’t say that we have no interest in VR because VR offers new ways of playing, but that depends on what kind of software can be played.”

Although the Nintendo VR headset mockup looks larger than most already out in the market, it is easy to imagine it as a real-life product. The Switch controllers, which can be slid off from the screen, contain motion sensors and could theoretically be used as Wii-like remotes.

Nintendo would not be the first big gaming company to try and make VR software. Sony recently released the PlayStation VR, which uses a headset that connects to the PlayStation 4 to play VR games. Xbox has yet to announced a standalone VR headset, but some of its games are compatible with the Oculus Rift. However, it will be interesting to see how Nintendo adapts to the virtual world.

Kimishima said that what consumers saw in the first Switch trailer was “by no means was that everything.” Therefore, Nintendo fans could see a VR headset on January 12 when the company reveals the console’s functionality, games and future hardware.