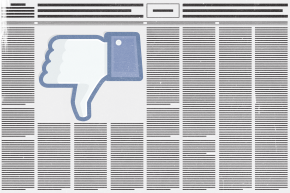 After some time denying the problem, Facebook is now trying to get more serious about the large-scale spread of patently false “news” reports, conspiracy theories and hoaxes on its platform.

A company announcement, posted to Facebook’s blog on Thursday, shares a new strategy it is testing for fact-checking, demarcating and hiding this type of content. Facebook will begin giving users the ability to report false news posts by clicking on the upper right corner of a post and selecting the option “It’s a fake news story.” The next option, for the user, involves marking the post as fake news on the grounds that it is “fake or purposefully deceitful,” alerting the author or blocking them.

These reports will allow Facebook to forward posts to a contracted fact checking organization. Though they do not specifically name the third-party organization in its release, only stating that it is a signatory of Poynter’s International Fact Checking Code of Principles, the New York Times reports that this coalition will include Snopes, PolitiFact and ABC News. If the story is found to be false, it will be labeled as such and buried within Facebook users’ News Feed.

This approach follows ample public criticism that the social media site hasn’t been proactive enough in fighting the spread of extremely deceptive or outright false content. Mark Zuckerberg stated, shortly after the U.S. election, that “fake news” on Facebook had no impact on the results (despite the fact that social media was the second-biggest election resource for Americans, only following cable TV news). Facebook leadership has since made a conscious effort to keep sites known for distributing deliberately false or hoax content from collecting revenue off page views acquired through the site.

While it will still be possible for users to share links to these stories after they have been deemed false, doing so will not be possible without receiving a prompt that reads, “Before you share this story, you might want to know that independent fact-checkers disputed its accuracy.” Users, however, will not be able to pay to promote these stories on the platform.

In addition to the company announcement, Zuckerberg personally acknowledged the site’s “greater responsibility than just building technology that information flows through” in a post on his own page. And that’s something that most Americans agree with: a survey published by Pew Research earlier on Thursday found that social media companies are seen as having a great deal of responsibility for keeping false news reports from proliferating online.