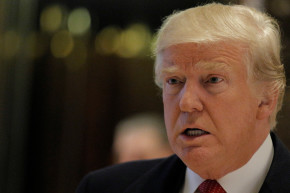 A group of demonstrators tried to deliver 400,000 signatures to Trump Tower on Thursday, the day he was meant to announce his plan to avoid conflicts of interest

On a frigid Thursday, a consortium of activists gathered in front Trump Tower in New York to deliver a 400,000-signature petition demanding Trump sell off his businesses entirely and place the proceeds in a blind trust.

December 15 was supposed to be the day President-elect Donald Trump told the world how he will be separating himself from his vast business holdings to avoid any conflicts of interest during his time in office. Instead, he pushed back this announcement — instead tweeting some slight clues as to his intentions. But, that hasn’t stopped the growing cries from activists pushing for explanations before Trump takes office on January 20.

“There is only one acceptable course of action, and that is for Trump to divest his holdings. If he’s going to be president after the electoral college votes next Monday, then he must avoid all conflicts of interest,” said Susan Lerner, the executive director of corruption watchdog Common Cause New York. “And the only acceptable way to do that is to sell his business assets and set up a blind trust, a trust which is administered by a truly independent entity or person. Not turning over his business interests over to his children or his family, who he has shown he wants to involve not only in his campaign but in the running of this country.”

Adam Smith, the communications director for Every Voice, a liberal political advocacy organization, poked fun at Trump’s schedule, noting that even though the president-elect was supposedly too busy to discuss his business holdings, he still found time to tweet about Vanity Fair on Thursday.

“This is a question of priorities. Does the next president of the United States believe in putting his national interests ahead of the public interest? The number one priority of the president of the United States should be doing what’s best for the American people,” Smith told reporters. “We shouldn’t have to wonder if his foreign policy decisions are being made because of the friendly governments to his investments in those countries. We shouldn’t to have to wonder if his administration’s views on work place protections are to save a buck at his hotels and casinos.”

Trump would almost certainly be in violation of what is sometimes referred to as the “emoluments clause” of the Constitution, or what political activist Zephyr Teachout referred to as the “foreign bribery clause,” which prohibits U.S. officials from receiving payments from foreign governments unless Congress permits it.

Trump’s foreign business interests undoubtedly are cause for concern: he is believed to have stakes in 144 businesses spread across 25 countries. Not to mention the hundreds of millions of dollars of debt for a real estate project that’s backed in part by the Bank of China.

“This is a national security risk and a foreign bribery risk the likes of which we really haven’t seen in this country,” Teachout said. “If you go back to the Constitutional Convention, you’ll see that the founders were fundamentally concerned about the amount of money that at the time France, England, other governments, would spend to influence American policy regarding war and peace and American trade policy. Right now we have a future president who is threatening to be vulnerable to foreign manipulation on questions of war and peace and questions of trade.”

Unfortunately, the activists had a difficult time delivering the boxes of signatures to Trump Tower — police only allowed a few to enter the tower. Trump, for his part, has still not said when he will speak about his businesses. (He did, however, thank Time Magazine on Thursday for making him 2016’s “Person of the Year.”)

Bloomberg reported on Monday that Trump would be delaying his business announcement because he’s busy with the presidential transition process. Officials with Trump’s team told reporter Kevin Cirilli that the announcement would instead come sometime in January before he is sworn into office. Trump, meanwhile, once again jumped on Twitter to say he would put his sons Don and Eric in charge by Inauguration Day.

Even though I am not mandated by law to do so, I will be leaving my busineses before January 20th so that I can focus full time on the……

Presidency. Two of my children, Don and Eric, plus executives, will manage them. No new deals will be done during my term(s) in office.

I will hold a press conference in the near future to discuss the business, Cabinet picks and all other topics of interest. Busy times!

Many were waiting for December 15 with bated breath, since Trump had been so secretive about his financial life during and after his presidential campaign. He has still not released his tax returns, for instance, even though every nominee in the past nine presidential elections has released them.