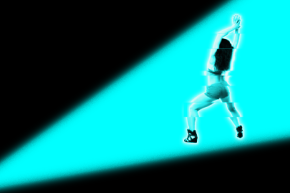 “We’re thrilled to announce the launch of Holo-Cam, which allows users to interact with cam girls in an immersive experience like never before,” said Daron Lundeen, president of CamSoda, in a press release. “Now users can interact with cam models right in their very own environment by beaming a live cam girl through their own phone/tablet. This is a huge milestone not only for us but the industry at large, and we’re excited to be leading the charge.”

The Holo-Cam livestream on a holographic projector

Users have to purchase a hologram projector, which can be obtained for as low as $1.50. Then they can use their desktop, smartphone or tablet to project a CamSoda cam performer in 3D. (CamSoda, you might recall, is also the creator of BlowCast, a virtual blow job platform.) The projected image is roughly half the size of the screen of whatever device you use, which means these are teeny tiny Tinker Bell-size projections. CamSoda will be launching these holographic shows “in the very near future,” according to the press release.

“The performers are viewable from 360-degress and cater to requests,” Lundeen told Vocativ in an email. “It’s much more immersive than sitting behind a laptop/computer/smartphone. That has become rather passé with the introduction of VR and teledildonics and now holograms. Everyone wants to be a protagonist within a story, not just some random guy/girl sitting behind a screen.”

But, you might ask, just how appealing is a miniature sexy hologram? “That’s a tough question because everyone has their own fantasies and fetishes,” he said. “I’m sure some will appreciate the fact that the hologram is rather tiny and others might want a larger version to truly enjoy it.” Indeed, there is a thriving community of microphiles, who have sexual fantasies about miniature people or creatures, and many create 3D renderings and videos just to play out their desires. A hologram could bring those imaginings closer to reality.

So, as with so much technological innovation in the adult realm, there is the silly, novelty aspect of this — but there’s also the potential for it to bring people’s fantasies to life in a powerful way.