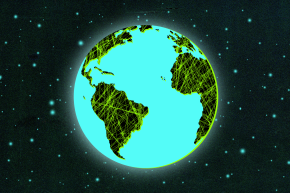 Roads Have Sliced Up The Earth Into A Half-Million Pieces

If humanity disappeared tomorrow, there would be perhaps no clearer or more pervasive record of our presence on this planet than our roads. The tens of millions of miles of roads that traverse the planet have chopped the Earth’s once interconnected ecosystems into more than 600,000 separate patches. And, as a new study observes, all those roads carry environmental dangers that we’re only now beginning to understand.

While roads are almost as old as human civilization — both the ancient Egyptians and Sumerians had paved streets — most roads we drive on today were built in the last 50 years. As researchers at Germany’s Eberswalde University observe in their new paper, infrastructure has a multiplier effect: A new road, which lets humans easily reach places that were previously inaccessible, makes it easier for humans to expand into new areas and accumulate the resources needed to, yes, build still more roads. This rapid development has left the Earth fragmented, with 80 percent of the world’s roadless patches measuring less than five square kilometers, according to the study.

“We have started a huge experiment not really understanding all the impacts of the global road network on ecosystems,” researcher Pierre L. Ibisch told Vocativ in an email.

Even leaving aside icebound Greenland and Antarctica, most of the Earth’s surface is still roadless. But only seven percent of the road-free patches are more than 100 square kilometers, compared with 20 percent that are less than a square kilometer in size. That last bit is particularly worrisome for the environment, considering since roads have an environmental footprint about a kilometer in either direction. Those potential threats of roads include deforestation, noise and chemical pollution, invasive species and a larger human presence. Roads are also generally terrible for wildlife, a barrier across what was once their unbroken environment.

While these are all local effects of roads, it all adds to another threat to the planetary ecosystem. And, as Ibisch explained, a fragmented and fragile environment is going to struggle to deal with the extreme conditions that global warming brings.

“We see several arguments for nature being more resilient in roadless areas. We also know that, in times of rapid climate change, it is of special importance that shifting species find relatively undisturbed tracts,” he said. “Road infrastructure makes it very difficult for many species to adapt to climate change.”

The way forward here isn’t to just wholesale stop building roads or rip up existing ones. But humanity has the unique potential to change the environment on a global scale, and so we better at least understand the problems with our roads turning the Earth into a massive jigsaw puzzle.