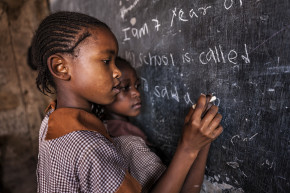 When parents have more income, they spend it on educating their daughters

In Sub-Saharan Africa, an estimated 50 million people rely on farming to survive. The health of livestock can determine the health of those who keep them — when cattle get sick, people can starve — but the impact of vaccinating cattle to protect them from disease can have even deeper, more subtle effects on people’s wellbeing. As a new study finds, the more Kenyan farmers vaccinate their cattle, the more likely they are to send their girls to school.

The biggest threat to cattle in Kenya is East Coast fever, which is responsible for 40 percent of all calf deaths in their first year of life. The vaccination is expensive and difficult to handle, but it is highly effective in protecting herds. And while eliminating a primary killer of livestock has an obvious effect on people’s food security, researchers at Washington State University examined how not having to spend money on antibiotics, treatments for tick infestations or replacement calves could reshape households’ spending decisions elsewhere.

The difference might not sound massive. For an average Kenyan farming household of 15 people with 66 cattle, vaccinating the herd was found to provide the equivalent of about 3,580 Kenyan shillings, or 35 dollars, in extra income. But for families living in poverty-stricken regions, that money can go a long way, with education spending increasing on average by slightly more than that.

In particular, the researchers found one of the first places families spent more money was in sending girls to school. On average, increasing the number of cattle vaccinated by 10 percent led to a 0.8 percent increase in girls’ attendance in school. Some families used considerably more of their extra income on education than others, with some spending an extra five percent of income for every 10 percent increase in vaccinations.

What’s particularly interesting is how the effect broke along gender lines. While increased cattle vaccinations meant more girls going to school, only the number of cattle deaths affected whether boys went to school, with more deaths linked to a decrease in boys’ attendance. Lead researcher Thomas Marsh told Vocativ in an email that he was hesitant to push a specific interpretation when the data is so limited, but this might tie in with how households allocate their resources when they already give preferential treatment to boys. In other words, sending boys to school is a baseline expectation, which only doesn’t happen when times are tough, like when cattle are dying. Sending to girls is a luxury, something that happens when times are good.

As Marsh and his colleagues point out in the paper, there’s a long-established link between education and economic growth, with one reinforcing the other. So both boys and girls who go to school are more likely to grow up to be wealthier than their parents, which gives them still more opportunity to invest in education for their own children.