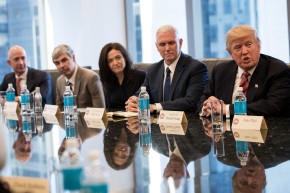 Silicon Valley’s giants entered Trump’s tower to talk business on Wednesday afternoon. President-elect Donald Trump summoned some of the biggest players in tech to discuss American jobs, international trade and their relationship with his incoming administration.

“I’m here to help you folks do well,” Trump said to the room filled with billionaires, some of whom had tense relationships with during his campaign. “We want you to keep going with the incredible innovation — there’s nobody like you in the world.”

Trump to tech leaders: “You're doing well right now and I'm very honored by the bounce...so right now everybody in this room has to like me” pic.twitter.com/LNhvHg31Wq

“I won’t tell you the hundreds of calls we’ve had asking to come to this meeting and I will say Peter would start saying, ‘no that company is too small,’” Trump said, referencing tech investor Peter Thiel, an advisor and one of his highest-profile supporters in Silicon Valley.

One of the notable CEO missing at the roundtable was Twitter’s CEO Jack Dorsey — who said he wasn’t sure if he was even invited. An aide to Trump told Business Insider that the reason Dorsey was not invited was because Twitter, the company, is not “big enough.” However, Politico reports that the reason Twitter’s co-founder was not invites is because he blocked Trump’s political ad campaign that featured the hashtag “#CrookedHillary” and a dollar bag emoji next to it.

Only the introduction of the meeting was public, after which reporters were reportedly ushered out of the room. But tech leaders and Trump could have discussed a host of key issues, including trade, tax and immigration policies as well as cybersecurity and Internet regulations.