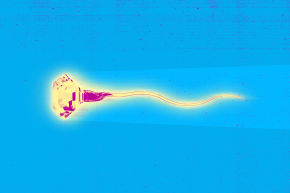 Here Are The Rarest Characteristics Of Donated Sperm

Picture a man with a pale complexion, brown hair, brown eyes, and a BMI in the “healthy” range. He’s a Christian with an educational background in business and accounting, and people say he has an excellent sense of humor.

This might sounds like the blandest of online dating profiles, but it’s actually an amalgam of the most common characteristics of sperm donors in the United Kingdom, according to new data analysis by the health website DrEd.com. Pardon the visual, but sperm banks are virtually overflowing with donations from guys with these particular traits.

If, on the other hand, you constructed a man from the least common characteristics, he would be a Buddhist with strawberry blonde hair, very dark brown or black eyes, a medium brown complexion, and an educational background in science. Men with any of these traits are a rarity in UK cryobanks.

DrEd compiled public, anonymous data on over 1,000 sperm donors from six private cryobanks and analyzed the prevalence of various traits. It’s worth noting that, contrary to popular imaginings, sperm donation isn’t an easy way to make a quick buck. It’s a highly selective — and, some might say, eugenic — process in which less than 10 percent of aspiring donors are accepted. (A man can be rejected for anything from having an STD to being dyslexic to having red hair.) The DrEd data doesn’t tell us which traits are in greatest demand, but it does reveal which ones are most and least common among those accepted for donation.

Then there’s complexion: fair or pale skin (43 percent) was the most common and dark brown (2 percent) was the least. DrEd notes, “While skin color is not wholly analogous to race or ethnicity, 87% of U.K. residents are white British.” (Although, it’s worth noting that these sperm banks also import donations from the U.S. and Denmark.) There is reportedly a shortage of donations in the UK from men from ethnic minority groups. In the U.S., Caucasian and Asian donors are overrepresented, while there is a dearth of African American, Latino and bi-racial donors. By some accounts, sperm banks are desperate for greater diversity — not on principle, of course, but because of demand. Although, unlike with egg donation, male donors are generally not better compensated for having in-demand sperm.

The highlight of the analysis, though, is the most common ways that sperm bank employees describe donors. No. 1 on that list: “sense of humor.” In the top ten, there’s “laid back,” “white teeth,” “great shape,” “great smile,” “broad shoulders,” “tall and lean,” “defined chin,” “handsome,” and “muscular build.” In other words, most UK sperm donors inspire fawning descriptions straight out of a bad romance novel.