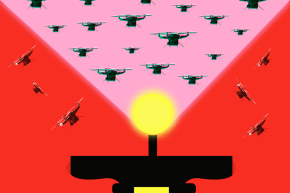 Taking a page from the terrifying artificial bees in that one episode of Black Mirror, the U.S. Department of Defense is looking to build a system capable of controlling enormous swarms of offensive drones. It’s part of an ongoing project to use tiny unmanned bots to support troops in urban battlefield environments.

Right now, DARPA is soliciting pitches as a way to support military operations in foreign urban environments. But given how quickly drones went from a military weapon to being used by law enforcement to shoot rubber bullets at protestors, swarming drones might also be coming home to roost sooner than we think.

The project would “enable users to monitor and direct potentially hundreds of unmanned platforms simultaneously in real time” using “augmented and virtual reality, voice-, gesture-, and touch-based” interfaces. Those control interfaces would feed into DARPA’s “Fast Lightweight Autonomy” program, which has been researching methods for having hordes of small drones autonomously handle basic tasks such as navigation and avoiding obstacles while still accepting commands from a human operator on the ground.

It also calls for a system for testing, developing and exchanging drone-swarming tactics, in the form of a “real-time, networked virtual environment that would support a physics-based, swarm tactics game.” This is essentially a highly-customized version of Starcraft for trying out different swarm strategies.

With the sharp rise of consumer drones, DARPA has also been researching ways to defend against these same capabilities. In August, the agency posted a solicitation requesting a separate system that can aid in the “detection, identification, tracking, and neutralization” of swarms of small unmanned drones.