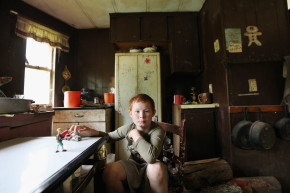 The Changing Face Of Death In The U.S.
By Alasdair Wilkins

The Changing Face Of Death In The U.S.

As the nation gets healthier, data reveal those who are left behind

The poorest regions in the country are also the unhealthiest — Getty Images
By Alasdair Wilkins
Dec 19, 2016 at 12:52 PM ET

Americans are living longer and dying less frequently than they did 30 years ago, but not everyone is feeling the benefits of the country’s improved health.

The good news is that deaths from diseases like cancer, diabetes, and HIV are down in much of the United States, a new analysis shows, but there are regions where the rates have doubled, tripled or worse since 1980. Those pockets of skyrocketing death rates are overwhelmingly found in the poorest counties in the country, in the south, southwest and Appalachia regions.

As a team of University of Washington researchers explain in a recent paper, relatively few studies have analyzed death rates for different diseases on a county-by-county level. As the nation’s overall health improves, there’s a real danger of losing sight of growing health inequality. Some counties are seeing major reductions in the death rate of certain diseases, while others are still devastated by them.

But first, it’s worth understanding the big picture. Heart disease and other cardiovascular problems remain the number one killer in the United States, with cancer not far behind. Compared with those two, most other causes of death are relatively rare, though neurological diseases like Alzheimer’s and Parkinson’s, respiratory problems like asthma and lung disease, and diabetes do all carry a significant toll.

Between 1980 and 2014, the most recent year with comprehensive data on causes of death, the rate of heart-related deaths has been cut in half. But deaths related to mental illness and drug abuse, while only a small portion of total deaths, have nearly tripled since 1980. HIV, AIDS and tuberculosis deaths are also far more common now than in 1980 (right before the beginning of the HIV epidemic). The rate of diabetes deaths has slightly increased, likely a reflection of the growing obesity epidemic. And while fewer children die in infancy than they did in 1980, more women today die from pregnancy-related causes.

But which counties are hit hardest by death? Looking at the top 500 counties — about a sixth of the country’s total number — both for present-day death rates and the biggest increases between 1980 and 2014 offers a stark sense of where diseases and other deadly social problems are clustered.

HIV and AIDS, for instance, are heavily concentrated in the southeast, and the highest death rates related to mental health issues and substance abuse are split between the West Virginia and Kentucky area and the western United States and Alaska, where there are many large, impoverished native communities. However, when you look at just the increases since 1980, then the map focuses almost solely on Appalachia and the surrounding parts of the Rust Belt.

Alcohol-related deaths are even more heavily clustered in those western, often heavily indigenous counties, though there the increases have been the biggest in western Texas and Appalachia. Cancer has one of the closest overlaps between overall and increasing mortality, with the maps tracing an arc from the Gulf region up to Kentucky and West Virginia. For malnutrition and especially neurological diseases, the maps for the counties with the highest death rates don’t necessarily reveal obvious patterns, but the maps for the biggest increases absolutely do, with both sets of increases heavily concentrated around Louisiana, Arkansas, Texas and Mississippi.

What’s important to note is that the regions that appear most frequently — Appalachia, the Gulf region, and native communities in the West — are generally the poorest in the country. It’s hard to imagine improving lifespan in these areas without more investment in public health. Yes, on average, the U.S. is getting healthier. But when that good health is unevenly distributed in a country of 320 million people, that can leave countless people behind to suffer.