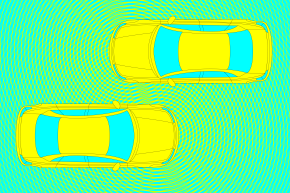 To Avoid Crashes, New Cars Could Be Required To ‘Talk’ To Each Other
By Janus Kopfstein

To Avoid Crashes, New Cars Could Be Required To ‘Talk’ To Each Other

The U.S. Department of Transportation has proposed new rules that would mandate vehicle-to-vehicle (V2V) communications systems in all new cars and trucks. If put in place, the rule could greatly accelerate the adoption of automated road safety and crash-avoidance technologies that will be key to the operation of driverless vehicles.

The proposed rules are the first of their kind. They would require all new cars and trucks weighing under 10,000 pounds to include systems that enable vehicles to send and receive status messages about their speed, position, heading, and braking through a short-range, WiFi-like radio network. It would also require automakers to agree on a common protocol for transmitting those messages, which are broadcasted to nearby vehicles 10 times per second, enabling vehicles from different manufacturers to “speak the same language.”

The National Highway Transportation Safety Administration (NHTSA) says it plans to release a separate proposal for a related technology called vehicle-to-infrastructure (V2I), which would enable vehicles to also communicate with traffic lights and other roadway infrastructure. Together, the NHTSA claims that the technologies “could eliminate or mitigate the severity of up to 80 percent of non-impaired crashes.”

The first cars utilizing vehicle-to-vehicle communications won’t automatically take control of steering and braking when they receive warning messages from other vehicles. Rather, they will send “basic safety messages” to drivers through color-coded alerts on the dashboard that prompt drivers to respond to increased danger.

The increasing connectedness of motor vehicles also has implications for security and privacy. All software has bugs, and security researchers have previously discovered flaws that enable a malicious hacker to remotely control virtually every aspect of an internet-connected vehicle, including the brakes and steering. The location information sent by short-range V2V and V2I should in theory be more protected from hacking attempts, however, since the networks only extend around 1,000 feet—assuming they are properly isolated from the car’s other systems. The NHTSA’s proposed rule also specifies that the V2V messages must be protected with encryption that meets security criteria set by the National Institute of Standards in Technology.

The deployment of these technologies will also be an important component in the safety systems for driverless vehicles. Earlier this week, Michigan became the first state to legalize the testing of fully-autonomous taxi-hailing services using vehicles that have no human driver, steering, or braking. And today, self-driving Uber cars started hitting the streets in San Francisco—with a human driver present as a safeguard, for now.