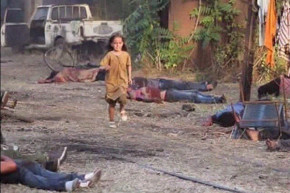 Fake Images Of Horror In Aleppo Spread On Social Media

Grisly images that have nothing to do with Aleppo are circulating online, frustrating people trying to tell fact from fiction

There are images circulating on social media portraying death and destruction out of the Syrian city of Aleppo, as the final days of the battle between Sunni rebels and government forces reached its end. But a large portion of those images are fake, sparking an uproar among those who argue the false posts diminish the reality of those suffering and fighting on the ground.

While the media has reported mass killings of civilians in the city, there have been no reliable photos of proof. Yet users such as @slman210 recently posted a photo purporting to show bodies in the streets of a Syrian town. In reality, those scenes were lifted from a Lebanese pop music video.

#fakenews story about massacre of civilians in #Aleppo has no evidence so their using fake photos from music videos and Pakistan bombing pic.twitter.com/zBNOxu4K4x

@filmyjoyo What's the point in sharing fake pictures then? Puts the credibility of genuine pictures under doubt as well. @sahouraxo

The UN estimates that nearly 400,000 people have been killed since the Syrian conflict began in 2011, and more than half the population has been displaced. The numbers, which cannot be verified, have led to accusations and rumors as people online try to sort fact from fiction.

To help, many Twitter users have posted an instructional video from FirstDraftNews, a non-profit that confronts trust and authenticity issues in the age of digital journalism.

The video, shared under #BreakingAleppo and #FakeNews, encourages Twitter users to first do a quick reverse image search before retweeting. It references a 2015 photo of “al-Qaeda militants in Homs, Syria,” which was actually a photo of Malian militants in 2012.

If you see a picture claiming to be from Aleppo, then quickly do the following before sharing it. #BreakingAleppo #fakenews pic.twitter.com/aL6UE94uUB

The dissemination of anachronistic or curated information are both intentionally carried out for propaganda purposes as well as by inadvertent social media users. In both cases, the atmosphere of misinformation only strengthens the Syrian regime’s insistence that all Western media reports of its forces’ atrocities are false.

In an October interview with Swiss media, President Bashar al-Assad called Omran Daqneesh, the 5-year-old boy from Aleppo whose stunned, dust-covered visage went viral on social media “a forged photo,” staged by the White Helmets volunteer rescue group. Unacknowledged was video also taken at the time, that shows the boy in the ambulance, corroborating the local medics’ version of events.

The deluge of unreliable images and information is not new. States have long struggled to win over local and international opinion by using the media.

During the 2014 Israeli-Gaza war for example, #GazaUnderAttack and #Israelunderfire racked up some 5 million retweets. They included tweets both by professional journalists and by local residents, but also included a number of images taken during the wars in Iraq and Syria.