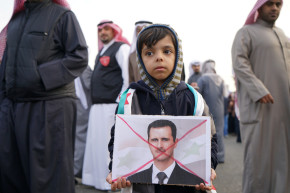 Around The World And Online, Protests For Aleppo
By Gilad Shiloach

Around The World And Online, Protests For Aleppo

Rather than direct their anger at their own leaders, Arabs make public protests on sectarian lines

As the people of Aleppo appealed for the world to take action against the advancing government troops, one of the greatest refrains was a call to fellow Muslims for help. A Shiite army was advancing, and Sunnis watching the impending fall saw the battle as yet another conflagration of Sunni-Shiite divisions.

But rather than lay blame at the feet of their own Sunni leaders, Arabs protesting Wednesday over the fall of Aleppo directed their anger at Syrian President Bashar al-Assad, who belongs to a Shiite strand of Islam and is supported by largely Shiite powers, including Iran, Lebanese and Iraqi Hezbollah, along with Russian President Vladimir Putin.

In Kuwait, Arabs held banners denouncing Assad and Russia, and in Turkey, activists held a massive rally in front of the Russian embassy in Ankara. Turkish Islamist groups launched a campaign named “Open Road to Aleppo,” inviting supporters to march from Istanbul to the border Turkey shares with Syria, and then on to Aleppo to help trapped residents.

There were calls Wednesday by the Syrian opposition for supporters across the world to launch protests this Friday in their countries, to pressure their leaders to intervene on Aleppo. “Take to the streets with angry demonstrations, press your governments and protest in front the embassies of Russia and Iran,” the page said. “Russia is committing a genocide against the people of Aleppo and Assad’s gangs commit massacres and executions every day.”

At present, the majority of Arabs protesting are doing so online, posting with hashtags that have appeared in over 700,000 tweets since Sunday. They include: “Oh the Muslim Nation, Aleppo is calling for help” (#يا_امه_الاسلام_حلب_تستغيث) and “Aleppo is being exterminated while the Arabs and the world are silent” (#حلب_تباد_بسكوت_العرب_والعالم). “Where is the pressure from Arab peoples for Aleppo?” asked some. Another said “Shame on the Muslim nation” for not taking action to support the Syrian people. “The faith of the Arabs and Muslims is in the hands of Russia, Iran and America and the other dogs with them,” tweeted another.

Syrian refugees and Arab activists are organizing events in solidarity with Aleppo across Europe, in countries including Sweden, Norway, Germany as well as in Sydney, Australia. In Zurich they are lighting candles. Out the front of the Russian Embassy in The Netherlands, some protesters are on a hunger strike.

Our convoy will depart from #Istanbul to #Syrian border tomorrow to show support for the tortured, displaced and massacred people of #Aleppo pic.twitter.com/ge3dmC8y0O

Translation: Vigil in front of the Russian Embassy on Wednesday