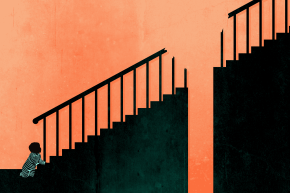 A Toddler’s Mental Health Can Predict Adult Lives Of Hardship

Society is already harming kids at three-years-old, but that also means there’s a chance to intervene early

If you want to save people from experiencing a lifetime of hardship, it pays to start early. A new study suggests that a small percentage of the population deals with far more than their fair share of problems like obesity, smoking and criminal convictions — and that it’s possible to predict who when they’re as young as three years old.

At first glance, that finding might sound like some kids are just destined for failure, but it’s actually the exact opposite: Society can help people in need, but it ought to start as soon as possible. After all, predicting a child’s future success or failure at age three isn’t the same thing as doing so at birth, when only genetics and family history could be a guide.

This particular research, led by social scientists at Duke University, seized upon a decades-long study run in Dunedin, New Zealand. Just over a thousand kids born between 1972 and 1973 had regular assessments every few years starting when they were three and going until they were 38. The study offered a uniquely complete dataset to see both how the kids were doing when they were very young and how they turned out as adults.

Across a variety of health-related categories, 20 percent of the study population accounted for a disproportionate share of the hardships. That included almost all criminal convictions and cases of obesity, as well as around 80 percent of welfare benefits, offspring growing up in homes without a father, use of prescription drugs and nights spent in the hospital.

While it’s important to note that not all of these are inherently bad or wrong — there’s no implied criticism of single mothers here, for a start — they collectively point to problems that are often painful for individuals and costly for society at large to deal with. And the researchers found they could predict many of whom would end up in that hardest-hit 20 percent based on a combination of four mental health risk factors that were already measurable at age three: the family’s socioeconomic status, exposure to mistreatment, low IQ, and poor self-control. Even as toddlers, trauma had already started to accumulate.

“The modern family is under a lot of stress, and with it a lot of early childhood years are under a lot of stress,” University of Chicago economist James Heckman told Vocativ. Heckman, who was not involved in this study but has co-written a commentary on it, won the Nobel Prize in economics in 2000 and is an expert in childhood education. “If society doesn’t recognize the problem, it’s going to create a burden for the next generation.”

While the idea of forecasting a child’s future success or failure based on their mental health at age three sounds dystopian, Heckman argues this is essentially an optimistic study, especially when its basic findings are attached to policies intended to help children at risk. Assuming what’s true in Dunedin is true more generally — and that’s not certain — then societies have an opportunity to help people avoid the worst hardships before they even happen. Intervening to help a three-year-old improve his or her prospects for the future is far less expensive than the combined costs of paying for welfare, hospitalization or even incarceration.

“People tend to think of problems one at at a time,” said Heckman. “They typically say we want to reduce crime, we want to hire more police. We want to improve health, we build more hospitals, we train more doctors.” But in this case, there could be an opportunity to help people long before their problems have turned into a bunch of different discrete issues. Three-years-old is still young enough that broad interventions can work. In this case, Heckman said the big priority is improving children’s social and emotional skills along with their IQ, which is much easier to do in malleable young minds than those of adults.

Ultimately, Heckman said this study is one more refutation of the long discredited principle of Social Darwinism, the idea that some people are naturally destined to fail and other destined to succeed. But what’s tricky is that environmental and social hardships do accumulate across generations. Society has a chance to break that cycle, and perhaps the best place to start is when kids are just getting started on their paths, especially when society is culpable in creating these damaging environments in the first place..

“It’s really the question of what is the capacity of society to admit its own problems,” said Heckman. “And can we do something about those problems? Can we face reality?”